Stainless steel cookware seems to be making a comeback after decades in the doldrums, shunned for one simple reason: Food often stuck to the bottom of the pan.

Korean housewives started to give up on stainless steel around 30 to 40 years ago, fed up that their delicious blackened offerings had to be scraped off, no matter how much oil they used, it seemed. 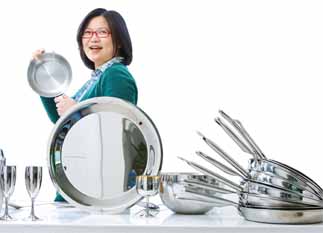 Stainless steel gave way to coated pans, which started enjoying huge popularity in the 1990s. Almost every household had at least one coated pan and they still command over 90 percent share of the local frying pan market.

They are cheap and light but the biggest advantage of using coated pans is that they are non-stick, which makes frying food like pajeon, a kind of Korean pancake, a lot easier. 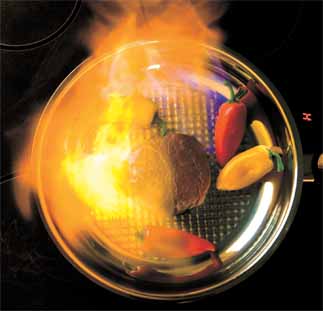 However, more shoppers are finding shining stainless steel cookware back on display these days, indicating there is growing interest.

What’s more, an Internet cafe (www.susamo.com) specifically for stainless steel pan users boasts a membership of 57,500 members who exchange information on how to use the pans.

So how did stainless steel ware make a comeback after years out in the cold?

The revival can be traced back to concerns over the safety of coated pans. Five years ago, a group of consumers filed a class action suit against DuPont, the developer of Teflon coating.

They argued that a chemical called PFOA used in Teflon coating could cause serious health problems. In the end, DuPont was fined 16.7 billion won ($11.1 million) because it did not submit information about the harm that its coating can cause.

The U.S.-based chemical giant agreed to pay the fine though it rejected the allegation that the coating contained the harmful chemical. The trial was over but it resulted in endless debates over coated pans’ safety, although manufacturers denied their Teflon-coated pans could cause health problems.

“The chemical PFOA was not detected in our Teflon pans,” said Kim Seon-mi, a spokeswoman for Tefal Korea, the biggest seller of Teflon pans in the country.

The Korea Food and Drug Administration said PFOA was not found in Teflon pans sold in the country, either.

Still, some local consumers were worried about the possible danger of using coated pans and started using stainless steel cookware.

The Internet site she started in 2005 for people interested in stainless steel pans quickly became a venue for thousands to exchange information on using stainless steel cookware.

Jeon also said she receives over 1,000 e-mails a year asking how to use the cookware properly.

Jeon said she was not always an expert. Seven years ago, she bought a stainless steel pan after watching chefs use a similar pan on television. However, using the pan was not as easy as she thought. Whenever she tried to roast or fry food, she ended up, you guessed it, with food stuck to the pan.

Out of curiosity, she asked a department store employee about how to use the cookware but she was told only that she shouldn’t used the pan to make pajeon.

Then one day, Jeon accidentally left a pan on the stove and by the time she realized, the pan was white hot. She put it aside to cool down and then greased it in preparation for cooking. To her amazement something remarkable happened. The fish she planned to fry started gliding around the pan. She wrote about the experience on her Web site and got a lot of interest and feedback.

Jeon is now a total convert and has over 100 pieces of stainless steel cookware. Some were passed down from her mother but she bought most of the others.

So this is the method to avoid sticky food: The stainless steel pan should be heated quickly for three minutes and then left to cool down for one to two minutes. (This helps the heat spread more evenly.) Then, you can oil the pan and cook the meal. If all goes well, the food item should slip around the pan like a skater on ice.

Lee Hyeon-ju, a 37-year-old housewife, is also a fan. She usually uses a stainless steel pan when she roasts meat. Lee said meat cooked in a pan usually cooks inside and out.

“Gravy stays inside the meat, which gives a savory taste,” Lee said.

“They transfer heat fast and they stay hot for a longer time like earthenware bowls,” Lee said.

Chefs said stainless steel pans are best when cooking steaks. The surface of the meat can be roasted until it turns brown. Then the steaks can be put into an oven along with the pan. This helps the meat stay juicy and not dry out.

The pans are not entirely free from sticking, and if food does adhere to the bottom, wash it off right away. Otherwise, the stuck food will burn black every time the pan is heated.

To get the stuck food off, pour water on the pan with a little bit of vinegar and then boil it. When the water has evaporated, the burn stain should wipe off easily.