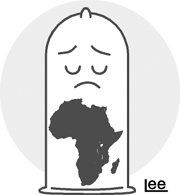 In a desert battle scene from the 1980 American war film “The Big Red One,” condoms appear in an unusual role. In the desert, the elastic rubbers have an important military function of preventing sand from clogging rifles. They were widely used during the Gulf War in 1991, inflating condom manufacturers’ stock prices at the time.

But the rubber’s primary functions as a contraceptive device and a preventative against sexually-transmitted diseases are more widely known. The first account of its use can be found in a thesis by Italian doctor Gabriel Falloppio in 1564 who described the use of a linen sheath to protect against syphilis infection. Some historians attribute the condom’s etymology to a doctor for England’s King Charles II, Dr. Condom, who was supposed to have used an animal intestine to fashion protection for his lothario king.

The two world wars served to accelerate the spread of condom use. Soldiers abused women on their trail of conquest. The Japanese army distributed condoms branded “Attack No. 1” to soldiers. The American army handed out condoms to its troops when it joined World War II, having experienced the spread of sexually transmitted infections in the First World War. Since then, the condom has become the most popular protective tool for birth control.

In 1981, the world learned of AIDS/HIV. The World Health Organization declared that condoms can reduce the spread of AIDS by more than 80 percent.

Pope Benedict XVI recently spoke out strongly against the idea, saying condoms only aggravate the problem of AIDS.

“One cannot overcome the problem with the distribution of condoms,” he said. “On the contrary, they increase the problem.” The Pope believed the solution to the problem lies in what he calls the “humanization of sexuality,” through fidelity and self-denial. His comments - made during a flight to Cameroon where more than 5 percent of adults suffer from HIV/AIDS. - came under fire from many European governments and media.

Southern Africa is home to 22 million AIDS-afflicted people, or 70 percent of the world’s HIV patients. More than 330,000 children die every year from this disease. Some 11.4 million children have lost their parents to the disease. Women are more vulnerable because they are easy victims in frequent civil wars in Africa. Many are forced to sell themselves on the streets for survival after losing their husbands.

There is wisdom in the Pope’s call for “spiritual human renewal.” However, the problem cannot be combated even if all African men followed the Catholic Church’s emphasis on fidelity. What happens to the couples when one of them is already HIV-infected? Do they not have the right to seek happiness? In their case, condoms can be their only savior. We hope the Catholic Church can offer a wiser solution to save families.

The writer is a deputy economic news editor of JoongAng Ilbo.