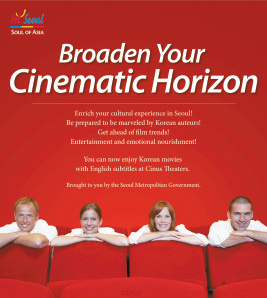 The subtitle service launched by Seoul city government this week will try to cover all Korean films released this year.Provided by the organizer

Two theaters in Seoul will be providing English subtitles to Korean movies released this year.

The service, which started this week, is available at two theaters of the local cinema chain Cinus.

One is in Myeong-dong, central Seoul, and the other in Gangnam, the southern part of the city.

“The expat population in Seoul is growing and we thought this kind of service is a must for non-Korean speakers to better enjoy Korean films and learn more about Korean culture,” said Jin Yong-deuk, the director in charge of the program at Seoul metropolitan government.

The Seoul government has teamed up with JoongAng Entertainment and Sports and the local multiplex chain Cinus to provide the service.

The two opening films to mark the start of this service have already made an impact with local movie fans.

One is “Old Partner,” Lee Chung-ryul’s documentary about a 30-year friendship between an elderly farming couple and their cow, which has sold 3 million tickets so far.

The other is “A Story Sadder than Sadness” directed by poet-turned-director Won Tae-yeon, featuring hallyu star Kwon Sang-woo.

Old Partner will run at Cinus Gangnam, commonly known as Cinus G, and A Story Sadder than Sadness at Cinus Myeong-dong.

Both will be screened from March 23 to April 1 about five times a day.

The line-up of other films for the service has yet to be finalized.

But the organizers say nearly all Korean movies released this year will get English subtitles at these two Cinus theaters.

“We also hope that the program will raise the brand image of Seoul as a foreigner-friendly city as well as contribute to promoting Korean movies around the world,” Jin added.

An opening ceremony will take place tonight at 7:30 p.m. at Cinus Myeong-dong.

The main event will be a preview of the English-subtitled Korean movie “Private Eye.”

For more information about the program, call 1544-0070 or visit www.cinus.co.kr.