The horrible beauty of Death’s dance

The horrible beauty of Death’s dance 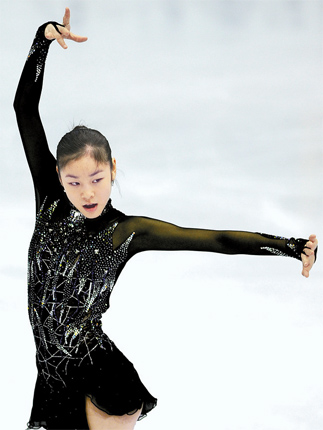 Kim Yu-na seems to be playing the roles of both Death and the victim of Death in her ‘Danse Macabre’ routine.

At midnight, Death plays the violin, kicking tombs with his heel. Then, the dead, only white skeletons now, crawl out of graves and dance, their bones cracking. This is the summary of a grotesque poem on which “La Danse Macabre,” a symphony by French composer Camille Saint Saens, is based.

This music now reminds many figure-skating fans, especially Koreans, of a totally different scene; a young lady in glittering black dress sliding on a white ice rink, jumping and spinning. It’s no surprise that the music for skater Kim Yu-na’s short program in this season, “The Dance of Death” in English, has become familiar to most Koreans, who even study tricky figure staking terms such as “triple flip” or “flying sit spin” to fully enjoy the performances of this local superstar. 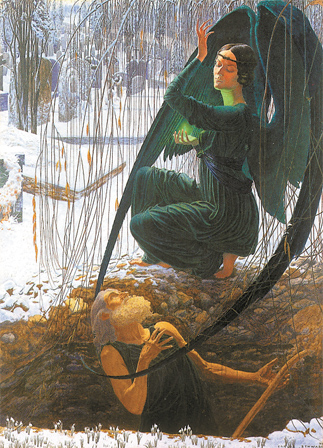 Kim, who is now competing in the ISU World Championship in Los Angeles, has awed audiences around the world with this short program. When she gives a haughty but enchanting look at the start and the end of her routine, she looks like the Angel of Death in a painting (picture 1) by Swiss symbolist Carlos Schwabe (1877-1926). The picture depicts an ironic scene in which an old gravedigger, who has made a living digging other people’s graves, now faces his own death. Come to collect the man’s soul, the Angel of Death, with her magnificent black wings, is eerie but beautiful.

Death was rarely personified as such a charming figure in European art until the early 19th century and the spread of the Romantic movement. Before the era of Romanticism, Death was portrayed as a disgusting skeleton or a decayed corpse. It was the Late Middle Ages when Death began to appear frequently in paintings as a skeletal figure. A painting (picture 3) by Bernt Notke (1435-1508), the most renowned artist in the Baltic region in his time, is typical of this style. The work is called “Totentanz,” which means “Danse Macabre” - the Dance of Death.

In this painting, Death takes the form of skeletons, lightly dancing and smiling weird grins while leading away a king holding a sword and an orb and a queen in a red dress embroidered with gold thread. In the other parts of this painting that still remain, a pope, a bishop and a feudal lord are also being led off by dancing skeletons. It is said that another part of the painting that has been lost includes people of lower ranks in the feudal hierarchy, such as a merchant and a farmer, also being taken to their doom by dancing Death, like other masters’ paintings of the same theme. This painting says that nobody can escape death, regardless of their ages, sexes and social positions. This painting also says that all wealth and honor is nothing in face of death. It is said that the Dance of Death allegory originated from a medieval religious play to remind people of the inevitability of death and spread to paintings and, later, to novels and music - including Saint Saens’ La Danse Macabre. 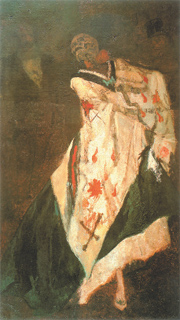 Why did European people of the Late Middle Age deal with the Dance of Death theme so intensively? And why did they use only terrible skeletons to personify Death, unlike the Romanticists in the 19th century? It is because, at that time, the Black Death had just laid waste to Europe, killing nearly a third of the population. Many, many people faced a sudden and painful demise.

There was even a shortage of hands to bury the dead, so bodies were left to decay in houses and on the streets, putting those who remained alive in a panic.

So, how could people of these times find romantic aspects in death, such as the sweet sorrow in the pale beauty Violetta, who dies of consumption in her lover’s arms? Amid the terrors of the Black Death, some people became fanatically religious, while others desperately indulged in last pleasures, including dances, to forget their worries. The Dance of Death was born of these two trends.

Many Western literary, musical and art works are based on the Dance of Death tradition, even if they don’t have the same title. One example is the “The Masque of the Red Death,” a short story by American writer Edgar Allan Poe (1809-1849). It’s about a prince and his noblemen who attempt to avoid a deadly plague called the Red Death by hiding in an isolated abbey. They indulge in various pleasures there, neglecting the tragedy outside. But, when they hold a splendid masquerade ball in seven rooms, each decorated with a different color, they encounter Red Death personified, who sneaks in among the revelers.

A painting (picture 2) by Belgian symbolist Felicien Rops (1833-1898) also has Death attending a ball, a place where the pleasures of life peak. One peculiar thing about this work is that Death is wearing a splendid kimono, while maintaining the Middle Ages skeleton tradition. The garb seems to reflect Japonism, a vogue for the Japanese arts in the West at the time.

One interesting aspect of Kim’s Danse Macabre is that she seems to be playing the roles of both Death and the victim of Death in the same program. When she twists her mouth into a cold, cruel smile at the start and end of the program, she is Death. And when, with a miserable expression on her face, she raises her arms as if trying to push something away in the straight line step sequence, she is Death’s victim. 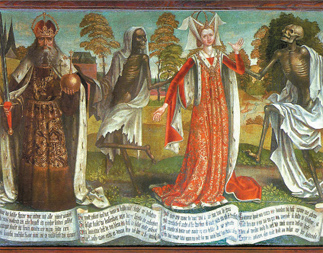 These delicate additions show the exquisiteness of the choreography of David Wilson, a Canadian former figure skater who now works as a choreographer for Kim and other skaters. It also shows Kim’s ability to understand the choreography and exceed herself in achieving its intentions.