[Talk of the town]
Tragic topic for actor’s 1st book 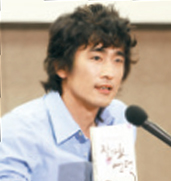 Actor Cha In-pyo now has one more title to add to his resume: author.

This week, he released his first novel, “Goodbye Hill,” and announced his debut as a writer.

At a press conference last Wednesday, Cha revealed that he had been working on the book for 10 years, ever since he saw a televised news report on a Korean woman who was forced to become a military sex slave during the Japanese colonial period.

“It made me think about the many women who suffered through the toughest times in Korean history. This book is my way of showing support for these women,” said Cha.

Goodbye Hill is a story about forgiveness and reconciliation. Taking place in a Korean village in the 1930s, it tells the story of a girl who is later forced to serve as a sex slave for Japanese soldiers.

Cha professed that while he loved to write, he had a hard time verifying historical facts. He also admitted that he didn’t think his writings would ever turn into a book.

Cha, who has three children including two adopted daughters, added that his family’s encouragement helped him finish the novel.