It’s not just about winning

It’s not just about winning 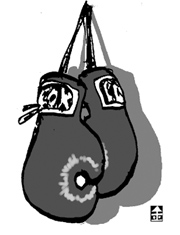 Muhammad Ali hardly knew anything about his opponent, Chuck Wepner, when he stepped into the ring at Richfield Coliseum in Ohio on March 24, 1975. There appeared to be no reason for Ali, who had beat the strong-fisted George Foreman in Zaire 5 months before and was champion of both the WBA and WBC, to tense up at the prospect of taking on a 36-year-old white boxer who was past his prime. Nobody thought Wepner would make it through more than three rounds.

But Wepner surprised everyone and made it through more than five rounds, and even knocked Ali down in round nine. This hurt Ali’s pride and he came at Wepner with all of his strength, but Wepner got back up again each time, with the skin above both his eyes torn and his face covered in blood. Ali’s TKO victory was announced in round 15, 19 seconds before the end of the match, but the crowd rather admirably applauded Wepner’s fighting spirit.

If this story seems familiar, it is because Sylvester Stallone, an unknown actor at the time, was inspired enough to quickly write a film about the event. The result, “Rocky,” in which he also starred, was a huge success. It even won an Academy Award the year after its release.

There is something different about Rocky from the sports films that came before it. The main character, Rocky Balboa, does not ask whether he won or lost, even after putting up a bloody and desperate fight. He is only proud that he did his best and fought to the end against his invincible opponent. Rocky’s pure passion has touched audiences around the world for around 30 years.

Twenty-four years to the day after Wepner’s admirable fight, on March 24 this year, the WBC finals opened at Dodger Stadium in Los Angeles. The difference between the finals and Ali’s story is that the champion, Japan, prepared to the fullest to beat Korea. Still, Korea managed to balance Japan with two wins and two losses in the preliminary round, and kept the palms of baseball fans around the world sweaty as it led the game to an extra inning, where it unfortunately and dramatically lost.

The current Korean baseball team is probably the first ever in any sport since the country’s founding to receive such thunderous applause and so many cheers after losing a game to Japan. The spirit of the players shone through, and the game was a real life lesson that the process is more important than the result.

In the last scene of Rocky, our champion, who is tired from fighting through 15 rounds, says disdainfully, “Ain’t gonna be no rematch.” This is probably exactly how the Japanese players felt at the WBC finals. Isn’t any opponent who draws all the energy out of a champion more than worthy of applause, whether he or she wins or not?