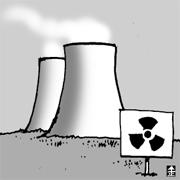 The accident at the Three Mile Island Unit 2 nuclear power plant in Pennsylvania began at about 4 a.m. on March 28, 1979. Some 100 milliliters of water flowed backward into the condensate polishing plant air pipe. The automatic control device stopped the supply of water. The cooling tower was paralyzed and steam burst out from the melting core.

On April 26, 1986, the Chernobyl power station disaster happened due to serious mistakes made by the plant operators in the context of a system where training was minimal. Northern Europe and adjacent areas were contaminated with radioactive material released into the atmosphere.

The atomic energy industry, which has been on a slippery downward slope for the past two decades due to repeated accidents, is now riding a new momentum for revitalization of nuclear energy. America’s atomic energy industry has not built a new nuclear power plant for the past three decades, but decided to construct its 31st unit this time. As combating greenhouse gas emissions appears on the main agenda for international forums, the assertion that coal-fired power plants should be replaced with nuclear ones is gaining support.

China, plagued by chronic shortages of electricity, plans to build 40 nuclear power plants by 2020. Sentiment in Europe has also shifted. Sweden has drafted a law allowing the construction of new nuclear power plants, and Italy will also establish more than four plants by 2020. Departments of nuclear energy in Japanese universities have recently sprung up on campus again.

The Korean government also plans to construct 12 additional nuclear power plants by 2022, to ensure that nuclear energy fuels half of electricity generation in the country.

The World Nuclear Association says that the number of nuclear power plants scheduled to be built worldwide is 108, with 266 possible plants under consideration. Currently there are 436 plants in operation.

However, due to the surge in demand, some experts insist that uranium reserves will run out in the next 50 years. In addition, radioactive waste, which will remain for more than 10,000 years, poses a serious question.

The United States has been troubled by the unsolved problems of creating the Yucca Mountain Nuclear Waste Repository in Nevada, which has been pushed forward with great energy for two decades. Environmentalists fear that the government is inviting the devil of nuclear power plants to drive away the evil spirits of global warming.

However, we should have a sense of shame about leaving dangerous waste for our descendants.