The work of, from left to right, South Korea’s Hong Sang-soo, Japan’s Naomi Kawase and the Philippines’ Lav Diaz will feature heavily in the Jeonju Digital Project, a key part of this year’s festival. Provided by the organizer

There is something for everyone at this year’s Jeonju International Film Festival, which is celebrating its 10th birthday this year.

JIFF, as the festival is commonly known, will be featuring around 200 films from 42 countries from April 30 to May 8, and the final program was announced this week.

The closing show will be the comedy “Machan” by Italian director Uberto Pasolini about a Sri Lankan handball team. 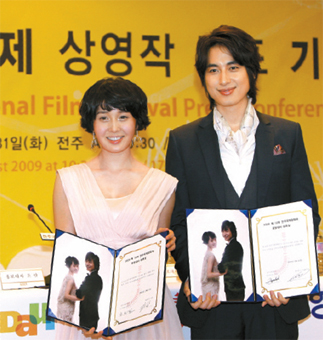 “The omnibus feature Short! Short! Short! 2009 started out as a project in 2007 to support short films in Korea and help them reach the overseas market,” said Min Byung-lock, the festival director. “There are ten directors involved to symbolize the JIFF’s 10th anniversary.”

The festival organizers are justly proud of their decade-long festival.

“JIFF has been growing successfully over the past ten years, maintaining a focus on original, high-quality independent and art films,” said Song Ha-jin, the JIFF committee president, at a press conference in Myeong-dong, central Seoul, on Tuesday.

So what can you expect if you make it down to this North Jeolla city?

Specifically to mark the 10th anniversary, the program “New Directors Discovered by JIFF” section will feature eight films by directors who debuted at the festival and later gained international recognition.

The project enables three directors each year to produce a 30-minute digital film on a budget of 50 million won ($36,845). Their work is then premiered at the festival.

Perhaps one of the highlights of this year’s event, and a real treat for film connoisseurs, will be a retrospective of the work of Polish auteur Jerzy Skolimowski.

After a 17-year hiatus, Skolimowski recently shot the disturbing “Four Nights with Anna,” a story about a loner obsessed with a nurse that had critics salivating.

Nine of his films will be screened during the retrospective, and to cap it all, Skolimowski is expected to visit the festival. He also celebrates his 71st birthday on May 5, event organizers said.

Of course, local filmmakers will have their best shot at promoting their work during the Korean Shorts Competition and the Korean Retrospective, which will screen Korean classics. This latter section has been revived following its cancelation in 2003, among others.

Meanwhile, South Korean actor Lee Jee-hoon and actress Joan were appointed to JIFF 2009 as publicity ambassadors on Tuesday. They will meet fans and appear at some of the events.

You can also buy tickets during the festival from May 1 onwards at JIFF Space and JIFF Service Center on Cinema Street, an arcade in downtown Jeonju set up for the festival.