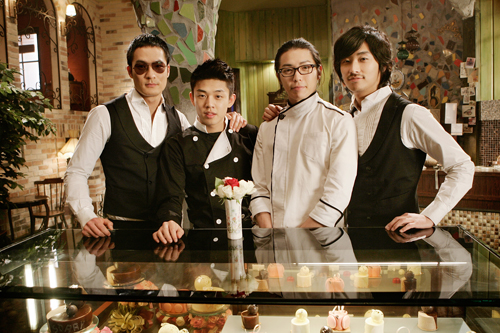 The manga of Fumi Yoshinaga has been a guilty pleasure of mine since I worked for the company that publishes her work in the United States a few years ago. Like many female Japanese comic artists she is obsessed with pretty boys, which doesn’t do much for me but her characters are complex and inhabit gentle slice-of-life stories, crafted with the humor of a skilled and sympathetic observer of human drama.

Yoshinaga’s only real mainstream hit is “Antique Bakery,” about the son of a rich family who decides to open a Western-style cake shop, which is odd because he hates cake. A series of subplots introduces an ensemble of other characters most of them also beautiful men. (The original manga, along with my favorite Yoshinaga title, “Flower of Life,” is available from Seoul import stores such as whatthebook.com.)

The Korean film version is simply called “Antique,” and though it’s moved the story to Seoul and given all the characters Korean names, it’s mostly faithful to the original.

Many of Yoshinaga’s manga fall under the genre of yaoi male homosexual romance comics for straight women and though Antique is not one of them, the influence shows in the character of Sun-woo (Kim Jae-wook), a genius patissier who has been fired from every hotel and department store in town because men, gay or straight, can’t help falling for his “demonic charm.”

Antique’s owner Jin-hyuk (Joo Ji-hoon), it so happens, rejected Sun-woo when the two were high school classmates, proving that he may be the only man immune to Sun-woo’s charms.

Sun-woo is terrified of women, so Jin-hyuk is forced to hire exclusively male staff, eventually ending up with a frustrated ex-boxer with a sweet tooth (played by Yoo Ah-in) and Soo-yung (Choi Ji-ho), Jin-hyuk’s clumsy but devoted childhood friend.

I have to admit I never pictured Antique Bakery as a musical, but the first half is just that as Jin-hyuk assembles his menagerie he’s interrupted by a line of chorus girls dressed as maids or bakers, dancing up a storm as Antique’s confections send its customers into fits of CG-animated ecstasy. It’s completely unexpected and uproariously funny. One sequence of Christmas deliveries sees Joo stumbling across town in a Santa suit, his car brimming with cake boxes.

Unfortunately, Antique takes a serious turn about halfway through, and it’s almost as though we’re watching a completely different film. Taking the place of the singing cake fairies is Sun-woo’s French mentor Jean-Baptiste (Andy Gillet), who tries to entice him back to Paris. Meanwhile, Jin-hyuk faces the secret from his past that led him to open the bakery.

The drama is not poorly executed. In fact it’s striking at times director Min Gyu-dong uses special effects to illustrate Jin-hyuk’s pain in a more frightening way than most Korean horror films. Yet it’s hard to shake the feeling that without its humor the movie has run out of steam.

Still, fans of pretty boys and cute dramedy should seek out Antique. And to their significant others: You just might enjoy yourselves too. I certainly did.