The 2009 Seoul Motor Show opened with great fanfare at Kintex in Ilsan District, Goyang, on Thursday.

A total of 13 domestic and foreign brands are taking part in the show, the biggest motor show in Korea, which will continue until April 12.

The impact of the global economic crisis is being clearly felt here. Half the foreign brands present at the previous show aren’t participating in the current event. Audi, Volkswagen, Mercedes-Benz, Toyota, Lexus, Honda, Ford and Lincoln are presenting their latest models and concept cars, but BMW, Nissan, Chrysler, Volvo, Mini, Land Rover, Mitsubishi and Saab are missing from the crowd.

Despite the lower level of participation, an automobile industry official said the Seoul Motor Show is still better off than other international motor shows. “The British International Motor Show in London was called off this year while most foreign importers are not going to participate in the Tokyo Motor Show,” said Yoon Dae-sung, executive managing director of the Korea Automobile Importers and Distributors Association. “The import car market in Korea is in a growth stage. That’s why the motor show is doing relatively better than others.”

Yoon said he expects 50,000 foreign automobiles will be sold in Korea this year, a 20 percent drop from last year.

Another plus is that the Toyota brand is at the show for the first time. Explaining the reasons behind participating, Taizo Chigira, the president and chief executive officer of Toyota Motor Korea, said, “Toyota cars are not yet in the market but we wanted to show off our concepts.”

One of the main themes at the biennial show is eco-friendly cars. With a growing awareness of global warming and ever-tightening environment regulations on emission standards, automakers have been developing hybrid models powered by both gasoline and electricity.

Hyundai Motor revealed its HND-4 and Avante LPI hybrid cars, and its sister company Kia Motors exhibited its Forte LPI hybrid car. The HND-4 is a four-door compact hatchback, while the Avante LPI hybrid is a production model and will be available for purchase in July. This will be the first domestic hybrid car in the market and the world’s first hybrid model powered by liquefied petroleum gas. It has a fuel efficiency of 17.2 kilometers (10.7 miles) per liter.

GM Daewoo’s Chevrolet Volt runs only on electricity, and the motor show marks the first time the model has been displayed in Asia. The Volt can travel 64 kilometers a day when it is fully charged. After 64 kilometers, it can produce electricity through a small generator.

The Honda New Insight is another model worth a look. Unlike other hybrid models, the New Insight was designed as a hybrid from the beginning. To enlarge storage space, its battery was positioned in a way that lowers the car’s center of gravity. It was launched in the Japanese market in February and sold 18,000 units in one month. The New Insight boasts a high fuel efficiency of 30 kilometers per liter.

Toyota is also exhibiting its Prius and Camry hybrid models. The Prius was the world’s first hybrid model launched in the market and has since set a benchmark for eco-friendly cars. A total of 1.2 million units have been sold as of January 2009 since its debut in 1997.

The model on display is the third generation Prius, which was first shown at the North American International Auto Show in January. With a fuel efficiency of 21.3 kilometers per liter, it’s Toyota’s first official foray in Korea, though some models have been brought in by domestic importers in the past.

The two models will be available for sale in October or November. The half-cut body of the Prius is on display to help visitors understand its mechanics.

Chigira, the Toyota Motor Korea chief, said he expects to sell 500 Toyota cars including the Prius per month this year and 1,000 units per month next year. Despite the strong yen, Chigira said the company will maintain prices at an affordable level.

In addition to hybrid cars, many new models and concept cars are on show. GM Daewoo Auto and Technology is displaying its next-generation Matiz mini car, also known as the Chevrolet Spark, which was first shown at the International Geneva Motor Show earlier this year. This model will go on the local market later this year. It will be sold under the Chevrolet Spark name elsewhere in Asia and Europe.

The three-door hatchback has a larger interior space than the current Matiz and looks edgier and sharper on the exterior. It also has a bigger engine displacement of 1,000 cubic centimeters.

Kia is also exhibiting its second-generation Sorento sport-utility vehicle. It is 95 millimeters (3.7 inches) longer but 15 millimeters shorter in height than the current model, which makes it more aerodynamic. It shares Kia’s family look characterized by its front grill.

A must-see model is the VG concept car, which was designed in Europe under the guidance by Kia’s design head Peter Schreyer. Kia has made enormous progress in terms of design under his leadership. The midsize luxury sedan will be positioned between its midsize Lotze and its full-size Opirus sedan and compete with Hyundai’s Grandeur. It will be debuting later this year. The Kia N3, codenamed the KED-6, is a subcompact concept car, which was also designed under the direction of Schreyer.

Renault Samsung Motors’s New SM3 compact sedan was developed after Renault’s Megane. The new model looks sleeker and more elegant than the current one. It is larger than the current model and equipped with 1.5-liter diesel engine or 1.6-liter gasoline engine. It will be released in the local market in July.

Lexus, Toyota’s luxury line, is showing its RX350 midsize SUV. The third-generation model on display is equipped with 10 airbags and a head-up display system, through which information is reflected off the front glass of the vehicle. It has a 3.5-liter V6 engine with 277 horsepower. A hybrid model of the vehicle, RX450h, is also in display.

Volkswagen is exhibiting the Tiguan R-Line, which has the strongest engine among the compact SUV line, and the four-door Passat CC coupe, which is sold under the CC name in the country. It is 50 millimeters shorter and thus looks sportier than the Passat sedan. Due to the lack of headroom in the backseat, an adult passenger’s head could easily touch the ceiling. 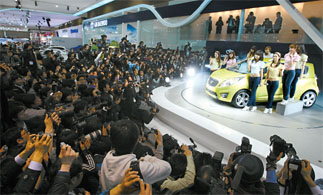 GM Daewoo Auto and Technology exhibits the next-generation Matiz at the Seoul Motor Show on Thursday. After performing onstage, the pop group Girls’ Generation poses beside the vehicle. [YONHAP]

During the motor show, there will be a lottery that will give visitors the chance to win 12 vehicles offered by eight brands.

Kintex is accessible via Daehwa Station, line No. 3, exit No. 1.