Views of the city ramparts

Views of the city ramparts 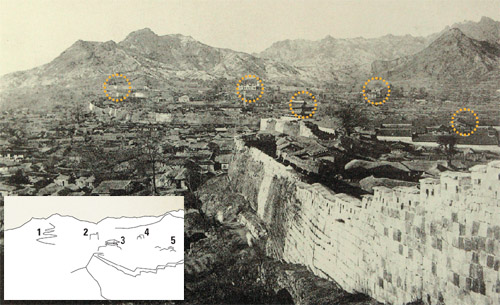 The photo on the left, presumed to be taken in the early years of the 20th century, shows the city wall stretching to Mount Inwang (1), the former Russian Legation (2), Sungnyemun (3), a structure within Deoksu Palace (4), and a government office of the Joseon Dynasty (5). Provided by Myongji University-LG Yeonam Library

The king was determined.

“A city wall is a country’s fence that keeps out violent enemies and protects the people. Thus, it must be erected.”

A city wall was in the mind of the king even before he picked the capital city for his new kingdom.

After he announced that Hanyang (now Seoul) would be the new capital later that year, Taejo ordered the construction of Jongmyo, a shrine for ancestors and Gyeongbok Palace, a home for himself. And to complete his vision, he initiated the building of a protective city wall.

According to records, Taejo ordered experts to find a good site for the wall, and visited the planned site himself several times in subsequent months.

It took 197,470 people drafted from across the country, 49 days (quite impressive) of hard work, and numerous injuries and deaths to complete the wall in 1396. It was 18 kilometers (11 miles) long and seven meters high.

The wall followed the ridges of four major mountains in four corners: Mount Naksan in the east, Inwang in the west, Namsan in the south and Bugak in the north. Four major gates and four smaller ones were also built to control passage in and out of the capital. 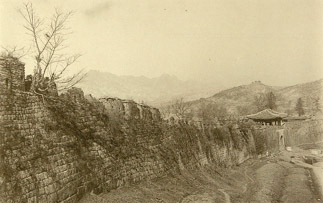 The city wall stretching from Gwanghuimun, a small southeastern gate.

In the photo above, found in the book “Views in the Far East” by Isabella L. Bishop, you can see the great southern gate Sungnyemun (widely known as Namdaemun) and the city wall spread on both sides.

The Japanese tore the wall down during the colonial period (1910-1945) and today only small parts of its remnants remain, hidden in a forest of high-rises and busy markets.

Even Sungnyemun, Korea’s National Treasure No. 1, is out of sight for now. It’s under reconstruction following the arson attack in February last year.

“Seoul’s city wall was very rare,” said Ahn Chang-mo, an architecture professor at Kyonggi University. “Most fortress cities in other parts of the world are built on level ground. But Seoul’s city wall was strategically built along the ridges of the mountains, making the inside land of the wall higher than the outside.”

Ahn, whose field is architectural history, is keen on collecting old photos of Seoul and unearthing unknown facts about the city.

Sohn Yeong-sik, an expert on traditional architecture, says the land inside the walls of the protective masonry around the capital was about 4 to 5 meters higher than the outside. 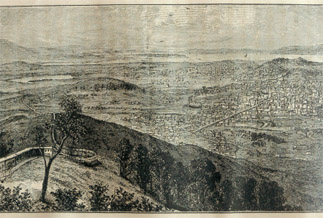 An illustration gives a wide view of the outside of the city wall into the Han River in the South. Provided by Myongji University-LG Yeonam Library

“Seoul’s city wall served its main purpose well, which was protection,” he said.

Also notable, Ahn says, are the contrasting scenes inside and outside of the wall. Within were tile-roofed houses and without were buildings covered in thatch, reflecting the economic gap between city and non-city dwellers. It’s not clear when the photo was taken or when the book was published.

“Views in the Far East is thought to be published in Tokyo, but its publication date is uncertain. It is just said to be sometime around 1900,” said Kim Jang-choon, a professor of English at Myongji College.

But the buildings that can be seen in the photo provide important clues.

One can see a two-story white structure to the left of the gate. It’s the Russian Legation built in 1890. Another structure, similar in shape, to the right of the gate also stands out. It’s Guseongheon, one of the Western-style structures within Gyeongun Palace (now Deoksu Palace).

According to Gwon Hyeon-ju, a manager of Deoksu Palace, Guseongheon is thought to have been built around 1900 and existed until 1906, according to historical documents about the palace, after which it was torn down.

“We can presume this photo was taken around 1904,” Ahn said in a phone interview.

To the right of the gate, one can spot Seonhyecheong, the government office that oversaw the collection of rice as an alternative taxation system during the Joseon Dynasty. In its place now stands Namdaemun Market, and only a stone monument remains to tell Seonhyecheong’s story.

Today, only about 11 kilometers of the city wall remain, scattered around the capital. These last ramparts were designated Historic Site No. 10 on Jan. 21, 1963, the same day the Cultural Heritage Administration began giving that title to historic areas.

The cultural heritage authorities, city and district offices and experts have assisted in the restoration of the wall. Currently under reconstruction are the remains of the wall on Mount Inwang and around Donui Gate, the great western gate. Plans are also underway to restore the wall on Mount Namsan and Heunginjimun, the great eastern gate known popularly as Dongdaemun. 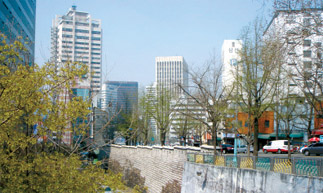 Today’s view of the restored city wall and Sungnyemun, in the distance, under repair. The higher ground level inside the wall and the lower level outside is still evident. By Kim Hyung-eun

But due to short-sighted city development that failed to anticipate that the city would want to preserve its cultural heritage, remnants of the wall are today used as part of a wall in a middle school and a private residence, among others.

“The biggest challenge is restoring walls near private properties or those replaced with infrastructures like new roads,” said Gwak Seok-gwon of the cultural department within the Seoul city government.

A city government report concerning these issues is expected to be finished in another month or so.

“It will be a very long time before we can feel the presence of the city wall close to home on a daily basis like they did in the past,” Gwak said.

The fascinating capital we often take for granted


It was 2,000 years ago when Seoul first took center stage in Korean history. The Baekje Kingdom (18 B.C.E.-660) chose the city as its capital. After the fall of Baekje, Seoul faded into the background for a few generations, but it sprang back into the limelight when the Joseon kingdom was founded in the 14th century and Seoul emerged as a key setting for the nation once again.

According to records, when an official recommended Hanyang (Seoul’s old name) to King Taejo as the new capital in 1394, he cited three reasons: It’s located in the center of the peninsula, it has decent land and water transportation routes and it has beautiful natural surroundings.

During the Japanese colonial period (1910-1945), the city was given a new name, Gyeongseong, as well as a painful makeover. After the Japanese left in 1945, the city became Seoul again.

Over the past seven decades the capital has undergone a number of facelifts depending on the whims of the ruling administration and the preferences of building owners.

Just in the last year since Mayor Oh Se-hoon took up the baton of Seoul city government, the authorities have torn down Dongdaemun Stadium and City Hall government building, both of which are examples of historic architecture.

“[Such reconstructions] are inevitable in a capitalist society,” said Park Ju-seok, a professor at Myongji University. “Although awareness for preservation has risen recently, the fate of historic sites and buildings depends very much on the administration in power.”

It was the rapid transformation of Seoul in the last few decades that prompted this reporter to plan this series.

Over the next few months, the JoongAng Daily will run old photographs of Seoul, reminding ourselves of what we are missing and rediscovering many of the elements of this city that we all too often take for granted.