Sense and sensibility, with a Spaniard

Sense and sensibility, with a Spaniard 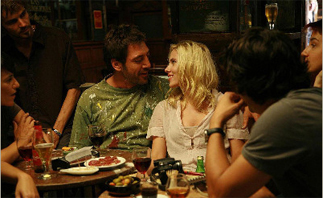 
As Woody Allen has aged, he’s passed the mantle of the neurotic hero to younger actors. This time, as writer and director of “Vicky Cristina Barcelona,” he cloaks young Rebecca Hall in that lovable Alvy Singer-esque persona. Hall plays Vicky, who, with her freewheeling best friend Cristina (Scarlett Johansson), decides to while away the summer in Barcelona.

Like many a good short story, the film is able to stay short and punchy through convenient narration, provided by Christopher Evan Welch. Thus, we are able to learn in the film’s opening lines that Vicky is “grounded and realistic” and seeks “seriousness and stability” in a man, whereas Cristina is a risky romantic who’s not quite sure what she’s looking for.

While Vicky Cristina Barcelona isn’t vapid enough to lump into the dreaded genre of romantic comedy, it does revolve around its two female leads’ ideas on love - specifically as it relates to a certain alluring Spanish painter. He comes in the form of Javier Bardem, who is probably as thankful as the audience that he gets to reappear as his sexpot self without the pageboy haircut from “No Country for Old Men.”

Like a true bohemian, Bardem’s character, Juan Antonio, propositions the lovely Vicky and Cristina with a weekend of wining, dining and lovemaking in Oviedo immediately upon making his introduction. Like a true neurotic, Vicky refuses in a flustered, blurted-out monologue on all the reasons why it’s a terrible idea - based on rumors, she refers to him as a “charmingly candid wife-beater.” But after all that, she humors the enthusiastic Cristina and tags along anyway.

Although Vicky, who is engaged, finds herself intrigued by Juan Antonio, she rationalizes her way out of becoming entangled, instead stepping aside for Cristina to pursue him. Thankfully, Allen eschews miring this story in the catty bitchery that often befalls females in film, and instead allows the friends to experience Juan Antonio in their separate ways. For Vicky, it means torturing herself with thoughts that circle back to the Spaniard, and for Cristina, that means moving in with him and beginning a torrid affair.

Enter Penelope Cruz. As Maria Elena, Juan Antonio’s tempestuous ex-wife, she injects liveliness and humor into the film’s awfully white-bread female cast. Cruz, who in the past seemed to favor roles as the quiet beauty, is a suicide-attempting, pistol-wielding hellcat here, and it’s a welcome change. Who knew Cruz could master such perfect deadpan delivery of Allen’s scathing lines? This, of course, is when I’m obligated to mention her best supporting actress Oscar win for the part.

But if Cruz is the electricity of Vicky Cristina Barcelona, Hall is the ground, and the one we’re really interested in. A bit of a coward and a martyr, she’s not the most likable character in the film, but she’s the one audiences can most relate to and root for.

Allen tackles this mission in a quiet, casual way, with none of the soaring instrumentals and fanfare of Hollywood. The film provides an escape, but in the end pleasantly deposits its audience - and characters - back in the same mundane place we started.