Master of the remake eyes Korean hits for Hollywood

Master of the remake eyes Korean hits for Hollywood 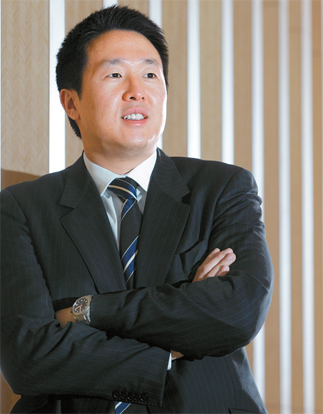 What do the movies “The Uninvited,” “My Sassy Girl” and “The Lake House” have in common?

Most cinephiles probably know that they are all remakes of hit Korean films, but what is less well publicized is the role of Korean-American film producer Roy Lee.

The man they often call the “King of the Asian box-office remake” made his name with his first remake, “The Ring,” the U.S. version of the Japanese horror “Ringu.”

The film that made him a player in Hollywood was “The Departed,” which won Best Picture at the 79th Academy Awards starring Leonardo DiCaprio and Matt Damon.

“My first remake, The Ring, was a hit. If that movie failed, or was terrible, I wouldn’t have continued [in the movie industry],” said Lee, a Korean-American who was born in New York, in a recent interview with the JoongAng Daily.

He was in town a few weeks ago to give a lecture on how Korean movies can advance into the U.S. and overseas markets at a seminar hosted by the Korea Culture and Content Agency in Seoul.

“I knew by the time we had the script for The Ring that it was a great movie because the script was really scary and good. So then I decided to go for other Asian horror movies,” Lee said.

His list of remakes have mainly been horror films or thrillers. “I develop the kind of movies I would normally see myself. I think that it makes it easier for me to develop them because I want to make them in a way I think the viewers will appreciate,” he added.

You may be surprised to hear that Lee, who now makes good money watching movies for a living, wasn’t much of a film fan when he was younger.

“I think it was more that I was interested in creating something. What I liked about the business of film was you actually put movies together and create something that didn’t exist before. I liked that and that’s what attracted me to this business,” said Lee, who was a lawyer before joining the motion picture world.

“Within four months of working at a law firm, I knew that it was not my thing - I didn’t see my future in that.”

Lee currently co-owns the production company Vertigo Entertainment, which was established with his partner Doug Davison in 2001 after six years working on numerous film projects at major Hollywood studios.

The next project for Davison and Lee, according to industry sources, is “The Ring Three,” a prequel to the original The Ring, scheduled for release in 2011.

Following a series of successful remakes, Lee is now eyeing films from all over the world, including three major Korean box-office hits - “Oldboy,” “The Host” and “The Chaser.”

“They are all amazing films and have the most potential to go into production because the profiles of studios and attachments that are involved make studios pay closer attention to them.

“As for Old Boy, because of Will Smith and Steven Spielberg [who will participate in the remake], it has a higher profile in the studios as they feel it could be a hit movie,” Lee said.

Lee said his favorite Korean filmmaker at the moment is Na Hong-jin, the director of The Chaser.

“We’re trying to get him to work with the United States. Warner Bros. has been asking me to get him to come and work with them because they saw potential in the movie The Chaser, as they see him as in the same vein as Chris Nolan and the Wachowski Brothers.”

“Korea has been doing movies that feel like Hollywood with those different genres and the amount of diversity, which ranges from thrillers to romantic comedies,” said Lee.

“I also think the way for Korean filmmakers to go forward is co-production. Currently, U.S. studios are not very open to co-production with Korea because they feel Korea is a small market, so Korean companies have to focus on finding interesting content instead of selling [their films] to Hollywood and partner with Hollywood.”