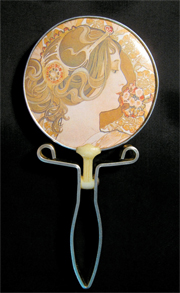 1, A mirror which uses a part of Alfons Mucha’s “Cowslip” for decoration.

Kkotminam, which means a “flower-like handsome man,” is now an everyday term in Korea.

But it first appeared in the media just 10 years ago.

At first, the term sounded strange, and for the unaccustomed it can still sound funny, due to the juxtaposition of flowers (kkot) and beautiful man (minam).

Several theories about the origin of the term exist. Some argue it might have sprung from the fair-faced boys in Greek mythology such as Adonis and Narcissus, who died young and turned into flowers.

Others claim the term comes from Hwarang, an elite group of male youths during the Silla kingdom.

Hwarang, which literally means flower-like youths, is said to have accepted only boys from noble families who were superior in looks and accomplished in military arts. 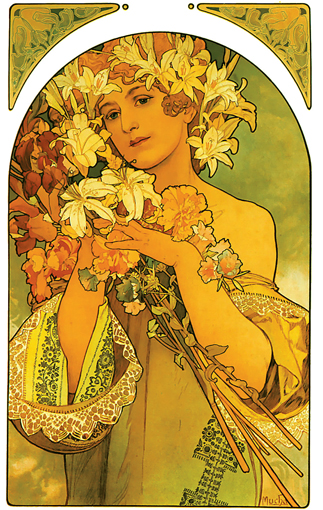 Another theory is the kkotminam started life in comics, or manga, for girls commonly called sunjeong manhwa. (Sunjeong means a pure heart).

In well-known manga such as “Candy Candy” and “The Rose of Versailles,” background flowers spontaneously burst into bloom whenever a pretty woman or a long-haired handsome guy with big shining eyes appears.

Maybe it was seeing these flowers respond to the beauty of the young men in the manga stories that prompted schoolgirls, the main readers of these comics, to start referring to kkotminam.

And perhaps the term gradually spread among male students and adults.

In my view, this is the most plausible explanation, suggesting that flowery backgrounds are an indispensable factor in girls’ comics.

You could argue that his work was a prototype for the characters set against flowery backgrounds found in Korean and Japanese comics. 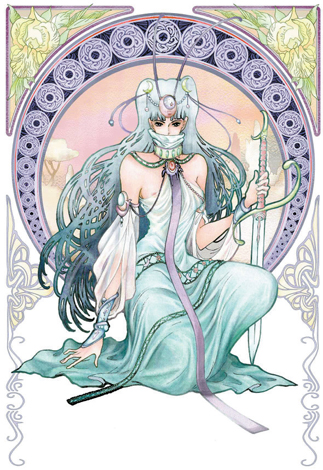 3, The cover of the fantasy comic “Red Moon” by Hwang Mi-na.

In fact, many manga authors turned to Mucha, considered one of the most prominent artists from the Art Nouveau period, for inspiration, and paid homage to his work through their own creations.

What distinguishes paintings and architecture that drew on the ideas contained within Art Nouveau, a decorative style that peaked at the end of the 19th and the start of the 20th century in Europe, are flowing clear lines and dynamic curves, like those of rolling flames and far-reaching vines.

We can see how Mucha uses such elegant curves and rhythmic lines in his lithographs “Flowers” (Picture 2) and “Dance” (Picture 4) to depict flower petals, women’s undulating hair, the shape of their bodies and their swelling robes.

I can even remember a time back in school when one of my friends pointed to the cover of a book I was reading that was decorated with a rendition of Mucha’s Flowers and said, “Who painted this manwha? Good job!”

I laughed at the time but my friend was not far off the mark: The crystal lines and decorative patterns that are so typical of much of Mucha’s work are certainly highly reminiscent of manhwa.

Mucha’s work shares two common points with Japanese manga and Korean manhwa (which is heavily influenced by manga) in terms of their background.

They were both inspired by woodblock prints and paintings known as ukiyo-e, which were produced during the Edo period in Japan between the 17th and the 19th centuries. 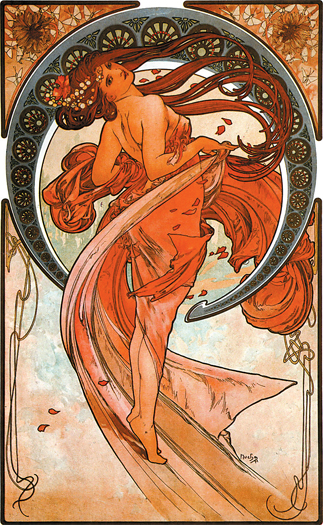 The other is that they were both made for mass printing.

Fortunately for Mucha, and the art world, he was working during the halcyon days of print, when new technologies such as chromolithography, a method for making multicolor prints, had become popular.

To appreciate the importance of print, we need to remind ourselves that back in the day, the media that now competes with print, such as the Internet, television and radio, were not options.

Rather, books, newspapers, magazines and illustrated posters were the lifeblood of communication and essential for the promulgation of culture and the arts.

A few years before the Art Nouveau period, ukiyo-e woodblock prints from Japan sparked keen interest, resulting in a Japonisme, which referred to the influence Japanese art had in late 19th century Europe.

The striking contrast of colors and the clear lines that dominate ukiyo-e jolted European artists at the end of the 19th century to imitate and expand their craft and ideas.

This kind of art was perfect for mass printing and the era became known as the Golden Age of Illustration.

Mucha was also influenced by ukiyo-e and especially the delicate patterns found in Japanese art crafts.

What he did was combine Japanese with traditional European motifs to create illustrations for decorative panels such as Flowers, Dance, theater posters, commercial posters and calendars.

Hwang Mi-na, known as the “Godmother of Korean Comics,” was heavily influenced by Mucha’s work as seen in Picture 3, which is the front cover one of her fantasy comics.

And Mucha’s works have also found a place in designs for everyday goods, not just manga, thanks to their elegant beauty.

For example, the hand-held mirror featured in Picture 1 is inspired by Mucha’s work known as “Cowslip.”