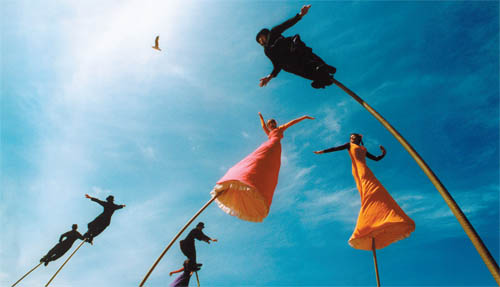 “Field” by Strange Fruit Provided by the Australian Embassy in Korea

Everyone likes a tin of assorted cookies that allows you to savor vanilla, chocolate, peanut butter, ginger, anything really, all in a single box.

This month, a series of performances by nine Australian performing arts companies will provide just as much variety for audiences in Seoul.

All you have to do is choose which one best suits your palate.

Korea and Australia are gearing up for the 50th anniversary of diplomatic ties between the two countries in 2011 by facilitating cultural exchanges that deepen cooperation between them.

Roger Rynd, the Australian artistic director of the Seoul-based Latt Children’s Theatre Company, who was also present at the press meeting, said the performances by the nine touring companies would reveal a bit of “Australia’s unique flavor.”

The arrival of the performing arts companies is no coincidence. May is a special month devoted to children and families with Children’s Day and Parents’ Day occurring in the same week, May 5 and 8, respectively, and a host of special activities around the city.

The Australian groups will inject their own style of family entertainment, performances which promise also to feature various aspects of the country’s rich cultural heritage. 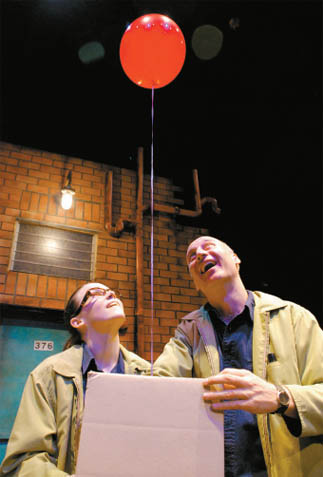 “Australia is also one of the most multicultural nations on the planet with more than 340 different cultures enriching our community, and thereby enriching the arts,” said Jeff Robinson, vice ambassador of Australia to Korea.

One company, Strange Fruit, stands above the rest - literally. The actors and actresses dance and perform standing on 5-meter (16-foot) flexible poles. For them, the sky becomes the stage as it serves as the backdrop for their surreal and often fantastic adventures.

Launched in 1994, Strange Fruit has traveled around 300 countries. It gained the inspiration for its gravity defying feats of fancy by studying the movement of wheat fields on a windy day.

But maneuvering on such long legs is not the biggest challenge the performers face. “The most difficult task for actors is maintaining a connection with the audience while working in such an abstract form,” Phillip Gleeson, associate artistic director, said, in an e-mail interview. 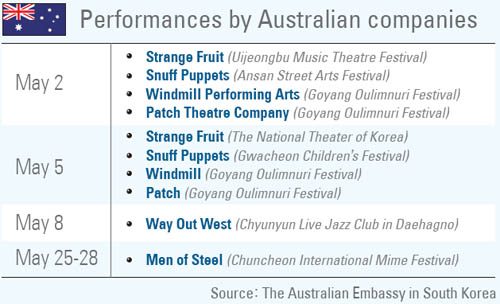