Diplomacy gets rid of a bad smell

Diplomacy gets rid of a bad smell 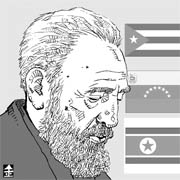 “Yesterday, the devil came here. Right here. And it smells of sulfur still today. Yesterday, ladies and gentlemen, from this rostrum, the president of the United States, the gentleman to whom I refer as the devil, came here, talking as if he owned the world. Truly. As the owner of the world. I think we could call a psychiatrist to analyze yesterday’s statement made by the president of the United States.”

On Sept. 20, 2006, President Hugo Chavez of Venezuela gave an address at the General Assembly of the United Nations and the otherwise grave gathering turned into chaos. His words could not be harsher. Former President George W. Bush, who had branded other nations as part of the “axis of evil,” was now himself called “the devil” who smelled of sulfur.

He must have been seriously offended. Everything the president of Venezuela said or did offended or upset Bush. Despite repeated warnings, Chavez visited the then-president of Iraq, Saddam Hussein, to share anti-American sentiments. He defended Iran when it was suspected of developing nuclear weapons, and Venezuela was the only country that opposed the UN resolution condemning Iran’s nuclear development.

As the leader of the world’s fifth-largest oil producing country, he also threatens to stop exporting oil to the U.S. whenever he can score points with it. His country is becoming a center of a domino effect of leftist administrations in Latin America.

Chavez is well known for being anti-American and had a mentor: Fidel Castro of Cuba. In 1992, the U.S. passed a bill to intensify its isolation of Cuba. It believed that just as support from the former Soviet Union was cut off, Cuba, too, would not survive for long. The U.S. cut the supply of not only food but also fertilizers. But Cuba improvised with organic agriculture using earthworms and survived. When the country could not get oil, Chavez supplied it at low prices.

The Bush administration formed the Commission for Assistance to a Free Cuba and supported the movement against the regime. But Castro’s younger brother Raul has taken over the regime and it is still intact. This situation of a Goliath unable to defeat David has persisted for more than half a century.

President Barack Obama has displayed his capacity for diplomacy in the 100 days since he took office. His “reset” diplomacy with Russia leads to an atmosphere for reconciliation with Cuba, Iran and Venezuela, which Washington has confronted for decades. North Korea is the only country that is missing on the list. That is because, unlike Chavez, who shakes hands with Obama, the leaders in Pyongyang keep playing the devil by firing missiles and reprocessing nuclear materials. If North Korea wants to normalize its ties with the U.S. it must push the reset button. But instead, it keeps pushing the backspace key.