Festive flowers for every fancy

Festive flowers for every fancy 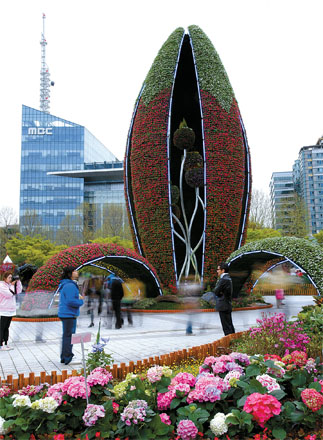 Spectators take photos near a plaza display made with 200,000 flowers. Provided by the Goyang International Flower Foundation

Beautiful flowers are everywhere this time of year, but nowhere are they flourishing as colorfully and in as many varieties as at Ilsan Lake Park in Goyang, Gyeonggi. At the International Horticulture Goyang Korea 2009, which continues until May 10, the grounds of Goyang are taken over by hundreds of flower displays ranging from delicate floricultural pieces to voluptuous flower sculptures. This year, the emphasis is on roses and cacti.

The show’s centerpiece is the “Jangmiran Cactus,” a giant cactus constructed out of 25,000 smaller cacti. It’s not to be missed. The cactus display is named and designed after gold medal-winning weightlifter Jang Mi-ran.

The motif continues in another artwork made of 200,000 beetle exoskeleton pieces gathered from Laos, Malaysia and Indonesia. Still another piece features 63 rare breeds of cacti from Africa and a collection of a thousand different kinds of butterflies. (Breathing bees and butterflies get a free ride into the show, but no one complains.)

To get away from these winged creatures, visitors can duck into one of three indoor exhibition halls showing commercial displays by 210 companies from 26 countries.

“We wanted to make it a truly international event and invited other countries to set up flower exhibition booths to show off flowers representative of their countries,” said Woo Ji-hwan, the managing director of the event.

Enthusiastic gardeners will want to visit yet another hall, where fragments of elaborate living garden landscapes have been reproduced by amateur gardeners and veteran professionals.

There is an endless variety of fun to be had in the expo’s various theme gardens. Visitors can play mini golf in the family garden featuring characters from “Alice in Wonderland” or meander down a deep green grassy path in the garden maze, which has a mist fountain and 3-D mirror. The Water Garden is built on stilts over the water. 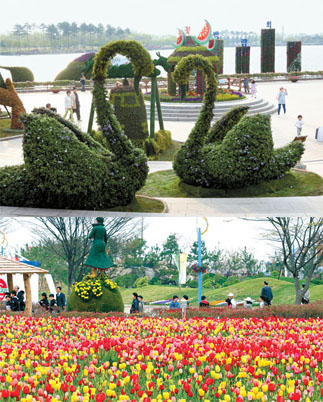 For children, there is a Peter Pan garden. Film fans will appreciate the Cinema Garden with its Batman, Spider-Man and Titanic mosaics. And couples should not forget to pause for a moment at the Garden of Love, which is adorned with 10,000 cascading roses.

There is plenty of entertainment at this year’s expo as well. At the “Body Flower Show,” fashion models wearing flowers strut their stuff on the catwalk. There is also a “Flower and Magic” show.

In the evening, visitors can relax around the lake nearby, where concerts of folk, classical and jazz music will be presented.

The exhibition is not just a tourist event but is also a way for Korea to promote its exports. As of Monday, a number of flower export deals worth $25,000 were signed, which was good news for flower farmers in the region.

“People are suffering from the economic slump and we wanted to help farmers and the community,” Woo said.

Goyang is also full of other attractions, such as the “singing fountain” near the lake and live classical guitar performances in the cafe village. More adventurous visitors can also trek out to area museums and zoos.


Vivid flowers unfold against the beauty of the blue seascape and warm spring sunshine at Korea Floritopia 2009 on Anmyeon Island. Under the overall theme of “dream,” this expo, which runs to May 20, features seven indoor event halls and 21 parks.

This year’s flower fair is particularly meaningful for area residents because it is the first event since the oil spill, which devastated the entire west coast region. The last Floritopia event was held seven years ago. 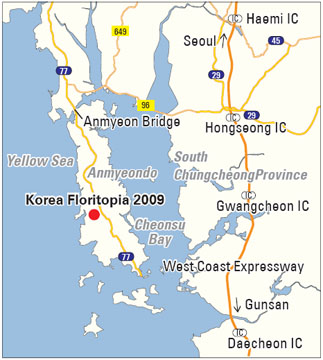 “After the oil spill, over 1.2 million people volunteered to come here and clean up the mess,” said Han Yoon-gu, a spokesperson for the event. “We wanted to thank the volunteers and at the same time revive the region’s depressed economy.”

Anmyeon is the sixth largest island in Korea and is located off of the western coast of the peninsula.

Prior to the spill, the island drew more than 100,000 tourists a year. But tourism dropped dramatically and the island has struggled to remove the residue of the black oil and recover.

The reopening of the festival has been all the more meaningful for the hardships South Chungcheong residents have faced.

But this year’s event is more than a mere continuation of the 2002 flower show. It will also help area residents realize their dream of revitalizing the community.

The expo also offers visitors a taste of food from around the world and splendid images of flowers projected through newfangled technological devices.

In the red fields of azaleas and the Garden of Jipi, fragrant smells drift on the breeze, wafting beyond the borders of the festival grounds.

What is truly amazing is that every one of the plants is rooted and in full bloom.

The amazing resilience of the Anmyeon community is the only thing that outshines the flowers on display here. Other outdoor exhibitions offer evergreen pine trees and refreshing sea waves. Or take a leisurely stroll around the 15 theme gardens, including the Ecological Marsh, the Evergreens, the Garden of Celadon Porcelain and the Royal Azalea Garden.

No matter where you wander, however, you’ll be surrounded by a forest of calm, the perfect promenade.