‘Thirst’ thrills, but can it conquer Cannes?

‘Thirst’ thrills, but can it conquer Cannes? 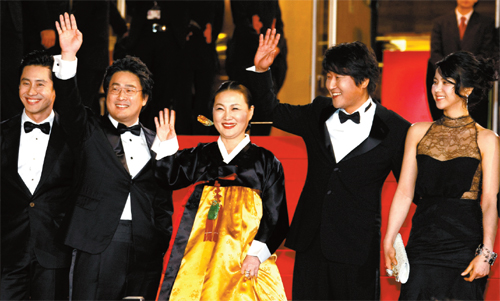 When director Park Chan-wook’s latest movie, “Thirst,” hit local theaters on April 30, reactions from the audience were clearly divided between those who thought Park had fulfilled the expectations that followed his previous films versus those who thought the movie’s plot and images were too provocative.

Yet the movie, called “Bakjwi” in Korean, drew 170,000 viewers just on its opening day, a record among films released this year, and the number rose at breakneck speed to reach 2 million last weekend.

In fact, Thirst was the talk of the town even before its release because it is one of the 20 films in competition for the Palme d’Or, the top prize at Cannes, and was touted as another critical hit for the internationally-acclaimed director.

Those gathered at Cannes certainly seem to be enthralled. After its gala screening there, it was reported to have received an eight-minute standing ovation.

Thirst tells the story of Sang-hyun (Song Kang-ho), a devout Catholic priest who became a vampire after a botched medical experiment. The movie has generated controversy for its subject matter and the protagonists’ sexual relationship.

“I intended to make Thirst into a very sensual film so that audiences can see, hear, feel and even smell it while watching it,” Park said in a press conference last weekend in Cannes. He said he also wanted to show the moral aspects behind Sang-hyun’s choices.

Park is perhaps best known for his “Vengeance” trilogy, which includes “Sympathy for Mr. Vengeance,” “Sympathy for Lady Vengeance” and “Oldboy,” the latter was unquestionably the most widely known work in the trilogy. It brought him the Grand Prix at Cannes five years ago.

While it remains to be seen whether Park will capture the highest honors at Cannes, the prospects for Thirst look bright. Time Magazine recently wrote that, “The film has made festival critics sit up in startled pleasure, as if they’d just received the most luscious neck bite. It’s almost guaranteed to get an important citation on closing night. Park’s Oldboy won the second-place award at Cannes in 2004. On its merits, Thirst should do better.”

The winner will be announced on Sunday.