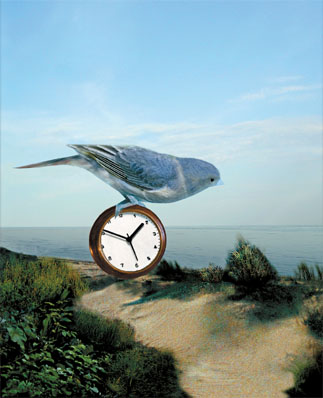 “Born to Run” by Phyu Mon from Myanmar

To mark the Asean-Korea Commemorative Summit 2009 being held on Jeju Island on June 1 and 2, nine galleries in Seoul are exhibiting the works of 30 artists from Korea and nine Association of Southeast Asian Nations member nations.

The exhibition, which will continue through June 6, is titled “Magnetic Power” to describe “a force that connects people.” Though the artists of the nine Asean-member countries are geographically and culturally far apart, they are brought together here through the power of their art.

Local art fans are unlikely to know the painters whose works feature in the show. Even though Southeast Asia is a popular destination for Korean tourists, contemporary artists and photographers in the region are not well known here.

According to Kim Yu-yeon, the curator of the exhibition, the art in countries like Singapore, Malaysia and Thailand is very advanced but the art markets of some Southeast Asian countries are less well developed.

Although the artists involved hail from 10 different countries, a common theme ties these diverse cultural experiences together.

“The pieces on display portray people’s mentality, a sense of nostalgia for the past and the roots of each country,” Kim says. “The artists were selected through months-long searches. We’ve selected artists who can help us understand Southeast Asia and show the aspect of life in the region.”

One of the most prominent artists in the exhibition is Yee I-Lann, who lives and works in both Kota Kinabalu and Kuala Lumpur, Malaysia, as an artist and a production designer for feature films.

“The buffalo is a symbolic animal in Malaysia since it is related to one’s wealth,” Kim says. “Buffaloes were given as dowry in the past.”

“But buffaloes are now slowly disappearing and artists want to raise the issue,” Kim says.

Another notable piece is “Born to Run” by Phyu Mon from Myanmar, on display at Gallery Sun Contemporary in Samcheong-dong.

The piece shows a bird standing on a clock placed by the seashore within an out-of-proportion landscape.

“The picture symbolizes a good life,” says Phyu, pointing out that flight is a bird’s effort to survive and through the effort, it can achieve a good life.

Phyu grew up in an environment distinguished by strong traditions and rich culture. Since her teens she has written poetry, short stories and painted.

Jompet Kuswidananto, a media artist from Indonesia, lives and works in Bali and Yogyakarta. He uses different mediums such as film, installation and performance art for his works.

“War of Java, do you remember? No. 2,” which is being shown at the Coreana Museum of Art: Space*C in Apgujeong-dong, southern Seoul, is a piece of video art that illustrates a conflict between traditional values and modern technology.

Kuswidananto’s works were shown at Biennale Cuvee 2009 at the Offenes Kulturhaus Oberosterreich in Austria and at the Yokohama Triennale in Japan in 2008.

At first glance, “Niagara 4,” a photo by Jaye Rhee, a Korean artist living and working in New York, appears to depict a group of people looking at Niagara Falls. Upon closer inspection, however, you can see they are not actually looking at the falls but at a wall covered with an image of the falls.

Rhee participated in the Kobe Biennale in Japan in 2007.

The Asean-Korea Centre, which sponsors the exhibition, is an international organization launched in March to promote cultural and trade exchange.