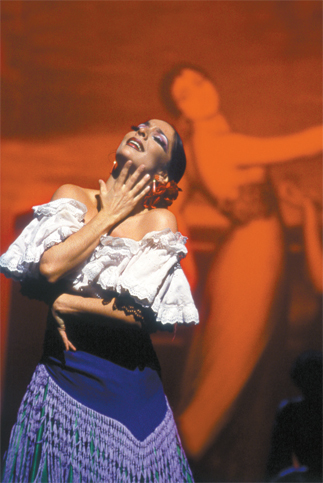 A scene from “Carmen Mota’s Fuego!” Provided by the organizer

The weather is sizzling hot these days, but it’s about to get even hotter with the arrival of “Carmen Mota’s Fuego!” from June 9 to 14 at the LG Arts Center in southern Seoul.

Mota, the artistic director and a former dancer herself, is eager to bring the production back to Seoul. “I remember the standing ovations and all the roses Korean audiences gave us at every curtain call,” the 76-year-old director said. “We’ve all been working very hard in response.”

This is the production’s third appearance in Korea, following presentations in 2005 and 2008. It has also toured to Russia, Israel, Greece and Turkey.

Flamenco grew out of the music and dance played by the people of Andalusia in southern Spain.

But as Mota says, “You don’t need to understand flamenco. You just need to feel it in your heart.”

The show is presented in two acts. In the first, performers dressed in stark blacks and whites present a contemporary flamenco dance. In the second, the performance is closer to the traditional style of the genre.

The show’s choreographer, Joaquin Marcelo, is Mota’s son and a dancer in his own right. He lost his hearing following an illness when he was just eight years old, but began dancing at the age of 21.

“Because I’ve lost my hearing, I focus my choreography on the visual elements,” says Marcelo. “Maybe that’s why my dances are more active.”