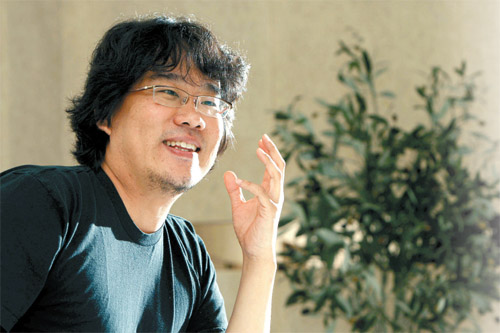 Had it not been for actress Kim Hye-ja, we may never have seen “Mother,” the new film by director Bong Joon-ho.

The acclaimed Korean director, whose latest work had its world premiere at this year’s Cannes Film Festival, said the movie had come about “all because of Kim.”

Bong confessed to always having been an enthusiastic admirer of the veteran actress, who has, over the past 30 years, become a symbolic mother figure here for her TV and film roles.

He wanted to make a film centered around her, but it occurred to him that being a national symbol of motherhood might be as much a burden as it was an honor. So he decided to craft a role for Kim that would showcase her talents and show more than one dimension of motherhood.

Mother tells the story of Hye-ja, a woman who is willing to do anything for her only son, Do-joon (played by hallyu star Won Bin), a 28-year-old with rather limited mental abilities who gets involved in a murder case. She is put to the test when confronted with the dilemma of having to make an extreme choice to save him.

Mother, which was featured in the Un Certain Regard section at Cannes, was given a favorable reception there. Variety magazine wrote that the film was “an engrossing portrait of a feisty Korean widow” that was “unjustly denied a competition berth at Cannes.”

In making the film, Bong said he wanted to show the duality of motherhood.

“A mother’s love is the most noble in the world, but when that love becomes excessive it can turn into madness. I felt that depicting the duality of motherhood would differentiate my film from other stories about it,” Bong said.

He did not hesitate to say that Kim Hye-ja was his inspiration.

“Without Kim Hye-ja, ‘Mother’ wouldn’t exist,” he said. “When I shot the film’s climactic scene with her, I felt a shudder, which proved to me how much I liked it.”

The film’s final scene struck a chord with Bong and filmgoers at Cannes.

Bong joyfully remembered receiving a slew of questions about the scene, which features Kim dancing with a group of ajumma, or middle-aged women, on a tour bus.

He said the scene, which is a not unfamiliar sight in Korea, must have looked strange to foreign viewers.

“I’m very interested in things that are peculiar to our country like that. In fact, I myself found it shocking when I saw a similar scene at Mount Odae National Park where I went on a school excursion when I was in high school,” he added with a laugh.

Bong earned fame as a director with his 2003 serial-killer mystery “Memories of Murder,” which drew more than 5 million viewers. He cemented his reputation as a hit-maker after his 2006 monster blockbuster “The Host” sold about 13 million tickets.

But Bong says he wants to be remembered for his work, not for the number of viewers his films are able to draw.

Mother is currently playing in local theaters and Le Transperceneige is scheduled for release in 2012.

“Mother” will be screened with English subtitles at CGV Yongsan; at two Cinus theaters in Myeong-dong and Gangnam; and at three Lotte Cinema theaters: Avenuel in Myeong-dong, Ansan and at Seomyeon in Busan.