Pass the spaghetti for a rambunctious remake

Pass the spaghetti for a rambunctious remake 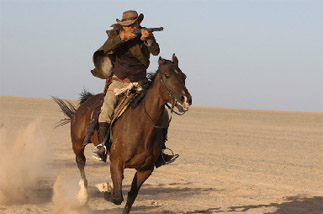 Park Do-won (Jung Woo-sung) never misses, even while riding in “The Good, the Bad and the Weird.” [CineSeoul]

Based on perhaps the greatest western of all time, “The Good, the Bad and the Weird,” last year’s Korean blockbuster now out on DVD with English subtitles, has big shoes to fill. And though none of its three main characters may have the one-of-a-kind charisma of Clint Eastwood, overall this re-setting of the Sergio Leone classic amid the wartime chaos of 1930s Manchuria is a fast, funny and exhilarating ride.

Here, the Confederate gold of the original is swapped out for a mysterious treasure depicted on a Russian map, which the Japanese army, the Korean independence fighters and a quirky group of Manchurian nomads are all pursuing.

In this new version, standing in for the Good is Park Do-won (Jung Woo-sung), a bounty hunter hired by the Koreans to retrieve the map. The Bad is Park Chang-yi (Lee Byung-hun), a pretty boy bandit who looks and acts a bit like a cross between Rain and Jack Sparrow, who starts out working for the map’s double-crossing owner. The final piece - the “weird” - is Yoon Tae-goo (Song Kang-ho), who seems gifted with little more than extraordinary luck.

Beautiful action sequences destroy a train, back alley black markets and bars before leading up to a striking finale, in which all the major actors ride across a desert battlefield as Japanese artillery make mince meat out of them. The guns are absurdly accurate or inaccurate, depending on who’s being shot or shot at, and you’ll hardly ever see anyone reload, but if you’re able to ignore that, there’s a lot of fun to be had.

One of the most refreshing parts about the film is the almost total lack of nationalist Korean politics. In this setting, many filmmakers would have found it irresistible to cram in some moral about Korea’s still-continuing tussles with Japan - but “Good, Bad, Weird” is completely message-free. The Japanese are evil, of course, but cartoonishly so, like Nazis in “Indiana Jones.”

Though it’s a little too silly to make serious claims about improving upon its predecessor, this update comes closer to it in spirit than many would admit. Leone was a great lover of hyperbolic, nearly absurd violence - he destroys a bedroom with a cannonball in the original, for heaven’s sake - and one likes to imagine that if he could see what director Kim Ji-woon had done here, he would smile.

The Good, the Bad and the Weird