Beyond a look at the average ajumma

Beyond a look at the average ajumma 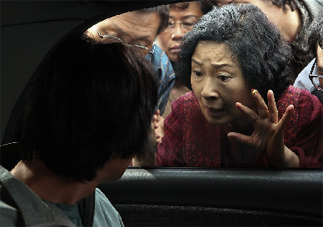 The title character in “Mother,” played by Kim Hye-ja, peers into a police car at her son Do-joon (Won Bin), who has just been arrested for murder. [CineSeoul]

Bong Joon-ho does not need to compromise. As director of the acclaimed “Memories of Murder” and the record-shattering box office hit “The Host,” he has earned the right to do whatever he wants.

Yet “Mother,” which he wrote and directed and is now showing in Korean theaters with English subtitles (see box), was reportedly specifically designed around star Kim Hye-ja. And Kim is no blushing ingenue, either - now 67, for a decade she has played the role of aging matron in cheesy TV melodramas.

That makes Mother, a sympathetic yet blunt and disturbing examination of family life, all the more a revelation. Kim’s performance is unexpected, complex and shockingly brilliant, at times recalling Helen Mirren’s similar career-capping turn in “The Queen.”

Yet this mother is no royal. In a poorer provincial city (the movie was filmed in South Jeolla), Kim’s character, known only as “mother,” lives with her son Do-joon (Won Bin) above the oriental pharmacy she runs. Do-joon suffers from mental and emotional handicaps that derive at least partially from his mother keeping him in an infantile state, feeding him, sleeping with him, arranging her world around him.

Bong has set out, in his own words, to explore not only the dignity of motherly love but also its potential to efface morality and become “addictive and insane.” And after Do-joon is arrested for murder, these undercurrents begin to float to the surface.

The tale twists in ways that would normally seem cliche - but thanks to Kim, with her mesmerizing attention to detail, and Bong’s keen eye for angle, which he uses to comment on character power relations, the journey itself is worth it. Bong has an ability to build and maintain suspense worthy of Hitchcock, who had a similar fascination with the potent yet frightening character of the strong woman.

But Kim could not carry the film without Won, who convinces the viewer to sympathize with his single-minded Do-joon, always distracted though he has flashes of lucidity. It’s never mentioned in what way Do-joon is disabled, and the character playing the psychiatrist in the film is in a drunken stupor - perhaps Bong’s dig at the state of mental health care in Korea.

Superficially, Mother has more in common with Bong’s earlier film than with The Host. Yet as he did in that monster flick, Bong uses Mother to defy expectations about his genre. At first the characters are played for laughs - Do-joon seems like a cartoonish buffoon and his mother the average fussy ajumma. But Bong sinks deep into the ugly hidden dimensions behind these archetypes, painting a distorted picture of codependency, desperation and the use of sex as a weapon, with creepy incestuous undertones.

Mother is a woman who, though friendly, knows as a matter of fact that she is entirely alone in the world, the only one who can care for her son. That relationship in many ways defines modern Korea, where parents’ self-worth is perhaps more caught up with the success of their children than anywhere else. And in this respectful, if occasionally bleak, portrait of this relationship, Bong and Kim have created a masterpiece.