Reminders of our fragile existence

Reminders of our fragile existence 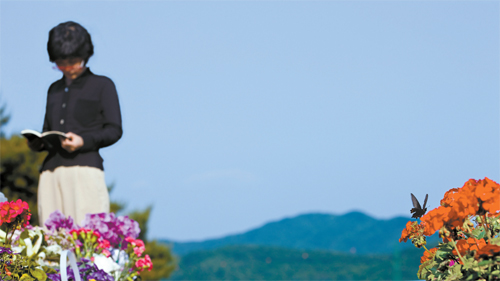 A woman stands at the grave of the late Cardinal Stephen Kim Sou-hwan at the Catholic Park Cemetery in Yongin, Gyeonggi.By Kwon Hyuk-jae

The mourning started in February. Cardinal Stephen Kim Sou-hwan died that month, leaving many people in this country grieving for the loss. And then we lost former President Roh Moo-hyun.

But unlike in other countries, Koreans haven’t historically visited the tombs of famous personalities. Visitors to Paris often visit Pere Lachaise Cemetery where many well-known figures are buried, such as Oscar Wilde and Jim Morrison, the lead singer of The Doors. Both memorials are routinely covered in flowers and messages. In Memphis, Tennessee in the United States, the tomb of Elvis Presley has attracted numerous visitors in the years since the singer died in 1977.

But, in light of recent events, it seems Koreans are now beginning to mourn more openly for beloved national figures. Fans of the actress Choi Jin-sil who died last October in an apparent suicide visit her resting place in Gyeonggi even though they didn’t know her personally.

And an estimated 5 million citizens waited in lines for hours to bid farewell to the late President Roh Moo-hyun last month. Just as Christians and non-Christians assembled to commemorate the late cardinal at Myeongdong Cathedral in central Seoul in February, both supporters and non-supporters honored the late president.

People do not prepare for their death. They rather expect to live forever. So when death comes and takes away our loved ones, we all tend to reflect on the very essence of our existence, pausing to thinking about the fragility of life and the complexities of death.

Visiting the final resting places of loved ones or people we never knew but respected might be appropriate on Korean Memorial Day, which falls today.