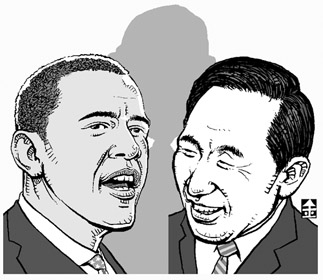 According to American psychologist Brett Pelham’s theory of “implicit egotism,” people tend to gravitate toward names, people, places and things that they can associate with themselves. Pelham claimed that the name Dennis was represented 80 percent more than Walter or Jerry in the American Dentist Association list as an example underlining the relationship between a person’s name and their choice of occupation.

Even without such theories we all know that it’s human nature to be drawn to someone with whom we share things in common. Presidents are no different as they, too, are humans after all. President Lee Myung-bak hit it off well with his U.S. counterpart George W. Bush largely because of their Christian backgrounds. The two leaders held church services in the Blue House and Camp David on their respective visits. Despite setbacks in other areas of his presidency, Lee is credited highly in diplomacy due to his efforts to strike a rapport with other heads of state.

Despite his diplomatic sensibilities, Lee nonetheless might not find it so easy to strike the right chord with his younger U.S. counterpart Barack Obama when they meet next week. A clear generation gap cannot be avoided with Obama in his 40s and Lee in his 60s. They share little common ground in ideology and personal interests. President Lee may have scored points with his Super Bowl conversation starter when he talked with Obama, a known sports fan, on the phone in February. But what other topics he has in mind for further small talk remain doubtful.

One good topic for some presidential bonding between the two would be their mothers. The two leaders hold deeply fond memories of their deceased mothers, both single moms who shaped them through strong emphasis on education and bred confidence in their sons.

Lee confessed that he learned everything from his mother, a market vendor who always had the respect and trust of her fellow workers. Obama has made a similar confession, saying he would not be where he is today had it not been for his mother, crediting his open-mindedness, passion for change and compassion for the weak to his motherly mentor who worked as an anthropologist and social worker while studying and raising children.

The personal touch can be extremely powerful in summit meetings. Former British Prime Minister Margaret Thatcher famously described former Soviet leader Mikhail Gorbachev as someone she could “do business with” after their first meeting, and subsequently became an enthusiastic supporter of his reform drive. Many analysts credit their strong friendship for contributing to the end of the Cold War.

We just hope President Lee and President Obama can strike some kind of chord so they can smoothly work together to solve the load of urgent issues on the agenda.