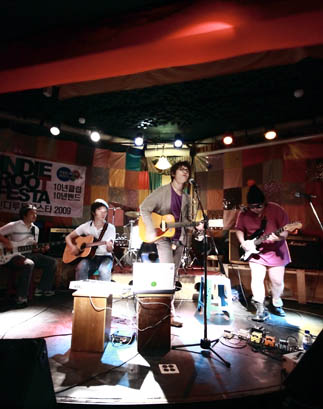 The area near Hongik University in northwestern Seoul, usually called “Hongdae-ap,” or just “Hongdae,” has been the place for underground musicians since the mid-1980s.

The neighborhood has become widely known for a unique culture established by indie bands and their loyal fans.

But it has never been easy for these bands to hit it big in the Korean music industry. Most artists struggle for years in local clubs and cafes, graduating from sidewalk busker to the concert stage, yet many still fail to promote their music as far as they’d like.

The 2009 Indie Root Festa is one way these musicians can generate more interest in their work.

The event began last month and is still going on in clubs and theaters around Hongdae and nearby Sinchon, northwestern Seoul.

“We want to support these musicians and get more people interested in the underground band scene,” says Kim Min-guk, general manager of the Live Music Development Association. The group founded and organized the festival this year.

“Famous bands like YB [formerly the Yoon Do-hyun Band] and Crying Nut all started out in this area, and we definitely hope other young indie musicians can grow as well,” added Kim.

To show their support for underground bands, YB and Crying Nut appeared in the festival on May 15 and 30. Other well-known groups such as Dr. Core 911 and Vodka Rain were on stage last Friday.

Ahn Seung-joon, the main vocalist for Vodka Rain, said he was happy to be part of the festival.

“There are about 300 indie musicians in the Hongdae area, so it’s pretty hard to organize an event like this,” he said.

Live Music Association’s Kim said the response has been great so far. “I was surprised to see so many passersby coming to the festival, not just the usual fans,” he said.

Ahn was also optimistic. “I think the future for the festa looks bright,” he said.

The party ends this week with two concerts on Friday and Saturday. On Friday at Queen Live Hall near Ewha Womans University, bands like Sugar Donut and Go Go Star will take to the stage.

Cherry Filter, No Brain, Rainy Sun, and others will be performing on Saturday at Sangsangmadang, near Hongik University. For more information, visit www.livemusic.or.kr.