The dawn of the Korean empire

The dawn of the Korean empire 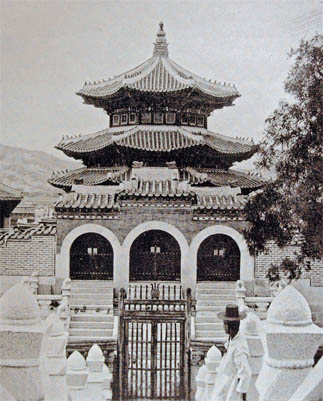 A picture of Hwanggungwu, or the octagonal structure that used to house ancestral tablets, presumed to be taken some time before 1911.

The following is an excerpt from an article on Oct. 14, 1897, in Dongnip Sinmun, or The Independent, Korea’s first modern newspaper: 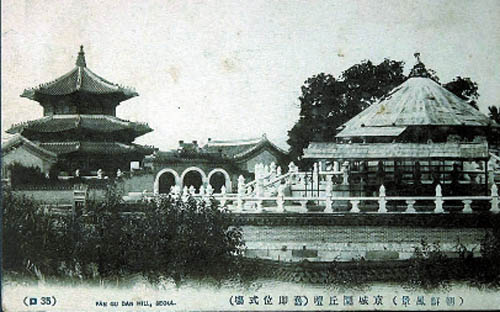 Hwangudan used to be a large complex consisting of structures like a temple, a shrine, a wall, several gates and three intricately carved stone drums. Provided by Myongji University-LG Yeonam Library

Hwangdan, later to be known as Hwangudan, was an altar for religious ceremonies in Jung District, central Seoul. Gyeongun Palace was the original name of Deoksu Palace, the main palace of the Korean Empire.

A further look into the article shows what a festive day it was. Stores and houses put out colorful lamps and the evening was as bright as day. National flags fluttered in the breeze.

“The faces of people on the streets were gleaming with joy. It rained and people got wet and cold, but they sincerely carried out their duties as rejoicing the auspicious event of their country was more important than wet clothes and the cold,” the article read.

The national festivity heralded a new beginning, a new Empire and the hope of better days to come.
Weak, incompetent leader?

One stigma forever attached to Gojong is his flight to the former Russian Legation in 1896.

Fearing for his life after his wife, Queen Min (Empress Myeongseong), was brutally murdered by Japanese agents, Gojong and his son took refuge with the Russians until the following year. 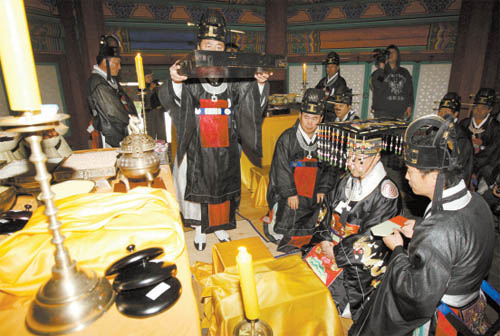 A group of Koreans revive the religious rites that took place in Hwangudan last November.

But several historians, most notably Lee Tae-jin, a professor of Korean studies at Seoul National University, have argued in recent years for a revisionist view of Gojong. In Lee’s 2000 book “Re-examining the Gojong Era,” plus numerous conferences and columns, Lee contends that the king was determined to build a new society and secretly gave orders to modernize Korea while residing in the Russian Legation.

Jeon Wu-yong, a member of the Cultural Heritage Administration and the author of a book about Seoul’s history called “Seoul is Deep,” is on the same page.

“Gojong planned the new country, new capital and palace of the empire while he was at the Russian Legation,” Jeon says.

One of Gojong’s orders was to construct Hwangudan, the altar for Heaven. Hwangudan is also known as Wongudan, but the Cultural Heritage Administration announced in 2005 that the official name would be Hwangudan based on its assessment of historical records.
Symbol of a new empire

Historians argue that Gojong’s decision to create Hwangudan signifies that between 1896 and 1897 he planned to bid adieu to the Joseon era and embrace a new empire.

According to historical records, Korean leaders used to hold rites to heaven during the Three Kingdoms period (57 B.C. - 668 A.D.). The ceremony was a wish for favorable weather and good harvests. But the rites were abolished during the latter part of the Joseon Dynasty in acknowledgement of Chinese suzerainty. The argument for their abolition was that only the Son of Heaven, then thought to be China, could hold such rites. Korea was thought of back then as a “country of feudal lords,” while China had its own Temple of Heaven that symbolized the country’s position in the grand scheme of things.

By resurrecting the rites of Heaven in Korea, Gojong was signaling a move away from China.

Deoksu Palace and Hwangudan used to stand face to face, years before the Seoul Plaza Hotel was built in between.

An octagonal structure, Hwanggungwu, and three stone drums were built shortly after Hwangudan was constructed. The picture (top) is from “The Story of Korea” written in 1911 by British diplomat Joseph H. Longford (1849-1925).

According to architectural historians, octagonal structures were also banned during the latter part of the Joseon Dynasty. The design is heavily symbolic of the divine in Chinese philosophy. By adopting such a structure, Korea was signaling an end to Joseon and vassal status and the birth of a new nation. 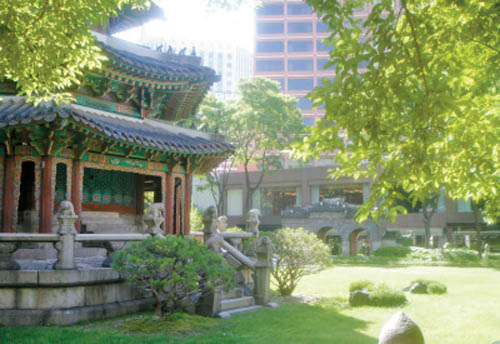 Today only the octagonal structure and parts of a gateway stand next to the Westin Chosun Hotel. Kim Hyung-eun

“Hwanggungwu housed the ancestral tablets for the gods of heaven and earth and a former king,” Jeon says. “Because the structure embraced heaven, earth and humankind, it made everything octagonal - an octagonal building, octagonal pillars, an octagonal balustrade.”

Hwangudan and Hwanggungwu were a proclamation to the world that the Korean Empire was a “Son of Heaven,” Jeon adds.

As can be seen in the picture (right), a postcard provided by Ahn Chang-mo, architectural history professor at Kyonggi University, Hwangudan and its related structures formed a noteworthy complex.

But today this once divine complex is dwarfed by hotels and high-rise office buildings. In 1914, the Japanese demolished Hwangudan and built Railroad Chosun Hotel, which was a precursor to the present-day Westin Chosun Hotel.

And the three stone drums, which used to be where today’s Lotte Department Store stands, were moved to the side of Hwanggungwu some time during the Japanese colonial period (1910-1945).

The main gate of the complex also vanished, eventually turning up in 2007 in poor condition. It was being used as the gate to Green Park Hotel in Ui-dong, northern Seoul.

What survived this painful dismantlement are just three structures: Hwanggungwu, the three stone drums and the gate with three arches that used to divide Hwangudan and Hwanggungwu.

Ahn and other historians lament how those with little knowledge of history regard the area as just a garden or pavilion of the Westin Chosun Hotel.

Perhaps there is a chance to restore the complex’s former glory, even partially. The Seoul city government said earlier this year that it plans to restore the main gate found in Ui-dong near Hwanggungwu.

“The gate has already been dismantled from Ui-dong. It will soon be set up near Hwanggungwu, perhaps this summer,” said Park Yeong-ju of the culture department of Seoul city government.

Park says that the gate cannot be placed in its original site, as it would be at the entrance of the Westin Chosun Hotel. Instead it will be placed to the northwest of Hwanggungwu.