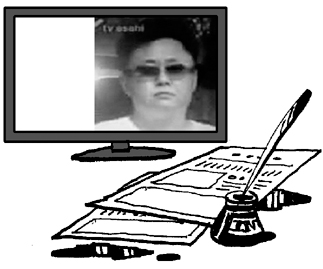 In May 2004, the pro-North Korean residents league in Japan sent letters to major broadcasters in Japan, including NHK. The letter stated that the organization would begin collecting a fee of $500 per minute for video clips taken from the North’s state-run Korean Central Television that the broadcasters had been using without a permit.

The intention was to correct Japanese broadcasters’ customary act of using the North Korean station’s clips that they received through satellites without official contracts.

The move was not really about collecting royalties or raising money - they wanted to reduce reports on North Korea that were usually critical about the communist country’s regime. The organization aimed to stop Japanese channels from running reports that criticized or mocked its Dear Leader Kim Jong-il.

Despite its efforts, however, the organization’s attempt to collect fees did not succeed in calming overheated competition among Japanese media outlets to air or run pieces on the reclusive country.

Particularly from 2002 - when anti-North Korean sentiment grew after it was confirmed that North Korea had abducted Japanese nationals - anything that has something to do with the North has been a hot, newsworthy item.

Some scoops were the result of persistent work and considerable investment of human and financial resources. But incorrect news reports, exaggerated stories and reports charged with emotion were produced as well.

The TV channel had been hoodwinked by someone who was only after the money.

During a summit meeting between the South and the North, another Japanese media outlet reported incorrectly that a South Korean official who happened to be standing near Kim Jong-il when a photo was taken was in fact a North Korean spy working against Japan.

Unfortunately, these are not rare cases. Many Japanese reports on North Korea are exaggerated or lack ground altogether.

A Japanese newspaper reported that Kim Jong-nam, Kim Jong-il’s first son, was preparing to seek asylum. The next day, he denied the report in a TV interview. Since Jong-nam is known for his unpredictable behavior, the incorrect news report might turn out to be true one day.

But we are not in the position to criticize someone else’s flaws. I want to remind all journalists both in Japan and Korea, including myself, to be more careful.