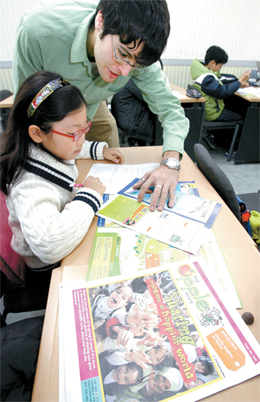 An English teacher helps make sense of a student’s assignment at an English language institute in Junggye-dong, northern Seoul.

Koreans have long prided themselves on their homogeneity, but with the rapid increase in the foreign population, attention has increasingly focused on creating a “multicultural” society.

The government is now hoping to expand the foreign population even further by amending the nationality law to allow dual citizenship to bring “talented people” to Korea. But with guidelines that are vague at best, it remains to be seen whether these efforts will succeed.

Korea’s foreign population has exceeded the 1 million mark in recent years, an indicator of just how much the landscape of the country’s population has changed.

Earlier this month at an event focused on increasing Korea’s birthrate, one of the lowest in the world, President Lee Myung-bak invited a group of multiracial families in order to emphasize this point.

Chu Kyu-ho, head of the Korea Immigration Service, hopes that the Justice Ministry will submit to the National Assembly a bill to revise the nationality law next month, after a consultative meeting between the government and ruling Grand National Party.

“This should not be an emotional issue, but should be viewed with an eye to the long term,” Chu said.

Currently, people wanting to obtain Korean citizenship have to live in the country for five years and take a written exam that assesses the test-taker’s knowledge of the country’s history and basic Korean language skills. If the new bill passes, these regulations will be scrapped.

According to the government, the measure is geared toward attracting professionals with a proven track record in their respective fields. (Hint: Having a Nobel Prize would certainly help, for example.) But unlike the country’s permanent residency system - for which people qualify by meeting specific conditions such as employment, business ownership or marriage to a Korean citizen - it has not yet provided details on what will distinguish someone who is a “professional” from someone who is not.

Meanwhile, the government is treading very carefully and holding public hearings in order to gauge the reactions of the public, which has not generally been receptive to the idea of hosting a larger foreign population.

The country’s foreign population can be separated into three major groups. Half of the over 1 million foreigners working in South Korea are ethnic Koreans from China who, like much of the rest of the immigrant population, work in the service and construction industries and in factories - sectors that Koreans are increasingly shying away from. The second group, professionals, is estimated by the Justice Ministry at roughly 34,000. Finally, there are marriage migrants, a group largely composed of Southeast Asian women who have married South Korean men living in rural areas. Such marriages are the result of the decline in Korea’s female population and the chronic problem of young people leaving for big cities.

At the heart of the matter is the question of what to do about the country’s mandatory military service. The government argues that because only a relatively small number of people will qualify for dual citizenship, military conscription should be waived, something that may not sit well with the men who have to spend two years in the military. Females are not required to serve.

The committee also tries to determine whether the person obtained citizenship in another country in order to dodge his military duty, but there are no set criteria to determine that, leaving the door open for powerful families to flex their muscles. Draft dodging has long been a problem here, and scandals involving the sons of politicians or businesspeople who have avoided military service by exploiting their connections are not uncommon. 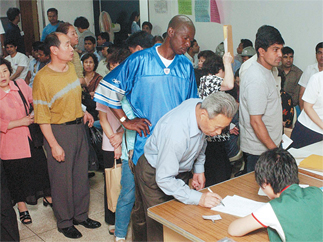 Since 1996, only 72,229 people have obtained Korean nationality, including 14,595 who dropped their Korean citizenship and later decided to recover it.

The government argues that giving foreigners a free pass from military service should be a small price to pay for top talent, pointing to a single survey conducted in May of last year by the immigration service. According to the survey, more than 70 percent of the 1,040 people polled said they would approve of giving talented foreigners Korean citizenship.

But Cha Gyu-geun, an official with the Immigration Service, admitted that the people polled were not asked about the conscription issue when the survey was conducted.


Pumping up the population

In past public hearings, the government has underlined the necessity of recruiting new talent, pointing out that increasing the country’s record-low birthrate - feared to dip below 1.0 child per household this year - will require drastic measures.

Recent studies have suggested that the country needs a population influx of between 1 million to 3 million people per year for the next several decades to maintain a workforce capable of supporting the economy.

“We are late in the game when it comes to attracting foreigners to the country,” said Jeon Gwang-hui, a professor of sociology at Chungnam National University. “On top of that, Korean society is very closed, which makes it harder for outsiders to get accepted.”

He attributes prevailing attitudes against the foreign population to the country’s history of invasion.

“This country was invaded many times in the past and it is surrounded by large countries even today, so there is always this feeling that Koreans have to close ranks,” the professor said.

He also expressed concern about the decline in the country’s economically active population, which is shrinking by the year. 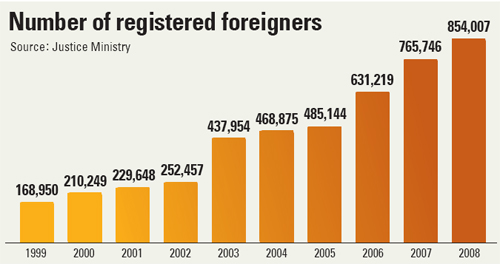 “This is to increase our global competitiveness. People should not view this as an attempt to benefit the wealthy,” a Blue House official said, speaking on condition of anonymity.

Apart from the recruitment drive, the government has tried to make living in Korea easier for foreigners. Foreign nationals now have access to Korean credit cards and can register with and use Korean Web sites, two things that previously were out of reach. The Seoul Global Center was established in January of last year and provides services such as help with housing, medical and legal issues. Other city districts and provinces have recently followed suit.

In May 2007, the government established a basic law regarding the treatment of foreigners, which stipulates that provincial governments must strive to provide for the education of the children of foreign workers. The law also designated May 20 as “Together Day,” the centerpiece of which is a ceremony honoring foreigners.

Although the government seems to have recognized the rising need to cater to the foreign population, the fast growth of this segment of society has given rise to a number problems.

Shin Sang-rok, an official with the civic group Foreign Emigrants Center, pointed out that more government assistance is needed. “Most children that are under the care of a mother [with foreign nationality] lack basic Korean skills and often fall behind in school,” said Shin. “Consequently, they don’t want to go to school and end up at home.”

The government is aware of the problem and has introduced special classes to help these children, but many schools either lack educators who are trained to deal with these problems or the funds to hire them.

An official with the Korea Immigration Service who declined to be named said that it was hard to secure sufficient funding for special classes and educators because other issues take greater priority among lawmakers.

“There is no doubt that foreigners and immigrants are an essential part of our society but there isn’t any widespread recognition of this,” said the official. “The general thinking is that money should be spent elsewhere.”

The Lee administration has also embarked on an ambitious drive to improve the country’s public English-language education and make life easier for the foreign population. All Korean English teachers will hold classes wholly in English by 2012, provided that a scheme announced by the Seoul Metropolitan Office of Education is implemented successfully. Under the government plan, more classroom time will be devoted to English education and more native-speaker teachers will be placed into the education system. Korean English teachers are resistant to the move, however, fearing they might lose their jobs.

Although the government has proposed that Korean-Americans and English teachers from countries other than the United States or Britain can be hired as English teachers, civic groups are opposed to the government’s plan, arguing that the measure will only spark further competition in an already competitive education market and increase private education costs that are already high.

There are other efforts under way to integrate foreigners into society. The Jeonju city government recently amended a law to allow more foreigners to be hired in special departments such as foreign investment. City districts are also initiating special programs to accommodate some of the needs of multiracial families as well. For instance, Dongjak District in southwestern Seoul runs a kindergarten program for the children of multiracial families.

The public’s reaction to the foreign population has largely been mixed.

The fact that the majority of foreigners in the country work in low-income sectors has in the past contributed to the overwhelmingly negative public sentiment against foreigners here. Another factor may be the increase in illegal immigrants, estimated at 190,000.

Immigrants “do a lot of work, but there are also problems such as crime,” said Kim Sang-min, an office worker.

The talk show “Chatting Beauties,” which featuring foreign females living in Korea talking about their experiences, has increased awareness of the foreign population and called attention to the needs of the foreign community. It’s one of the more popular KBS programs and consistently places at the top of the TV rankings.

Still, Koreans tend to have a low opinion of foreigners, especially those from countries perceived as less economically developed than Korea. This is especially true for English teachers. Korean parents generally prefer Caucasian teachers from Western countries over teachers of other nationalities, even if they are from countries where English is the official language.

Job opportunities may be important to attracting foreigners, but if public sentiment doesn’t change, the country’s ambitious recruiting drive may hit a snag.

“I am earning good money to support my parents and relatives in Vietnam but I wish sometimes I had more fun here,” said a middle manager at a restaurant in Gangbuk, the northern area of Seoul, who wanted to be identified only by her last name Kim. She was born in Vietnam and became a Korean citizen eight years ago, but said she was still yearning for full social acceptance.

“You always have this nagging feeling that there is something missing,” Kim said.

Lee Cham, a naturalized Korean of German descent who became a Korean citizen 31 years ago, says Korean society still has a long way to go before it will accept Koreans who don’t look physically Korean.

“The impression from outside is that Korean society is very closed and exclusive. There are no naturalized Koreans in Korean society with real responsibilities,” said Lee, who has been sitting on several ad hoc government committees in an advisory role. “The country would benefit from utilizing all its different human resources. Take the election of U.S. President Barrack Obama. That is the sort of message needed here.”