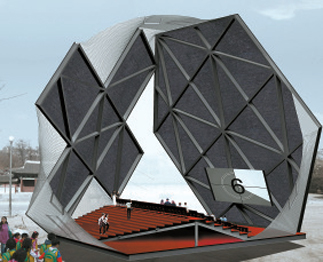 Prada Transformer will host a film series that starts on June 27 and runs through July 9. Provided by the organizer

The shape-shifting, topsy-turvy Prada Transformer has flipped around to host its next event.

The entertainment venue, which was erected in April on the grounds of Gyeonghui Palace in the heart of Seoul, has been reconfigured to host movies from June 27 through July 9 as part of the second stage of its transformation cycle, organizers announced last week.

Its first exhibition - “Waist Down: Skirts by Miuccia Prada” - ended May 24.

Under the theme “Flesh, Mind and Spirit,” the upcoming cinema series includes 14 films spanning various decades and genres. All of the films were chosen by Oscar-nominated Mexican director Alejandro Gonzalez Inarritu. Generally, one film will be shown each day over the two-week period. Half of the movies have never been screened before in Korea: “Ordet” (1955), “Last year at Marienbad” (1961), “I Am Cuba” (1964), “Fists in the Pocket” (1965), “Seasons of the Year” (1975), “Killer of Sheep” (1977) and “Mother and Son” (1997). 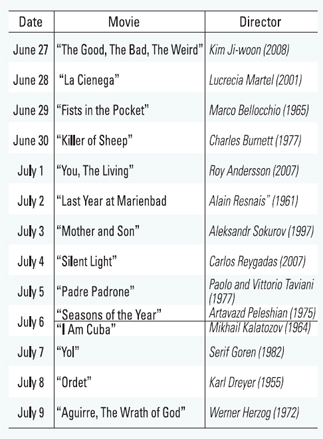 “It is a great privilege and a great joy for me to be able to share these masterpieces with the people of Seoul since the films are not easy to see nowadays in a screening room,” Inarritu said.

The director, who confessed that selecting the lineup was a difficult task, said he chose movies based on several criteria.

Each film will be shown three times on its scheduled day in its original language with Korean and English subtitles.

Admission is free. Online reservations can be made starting tomorrow at the official event venue’s Web site (www.pradatransformer.co.kr).

Those who register online will receive a reservation number that can be exchanged for a real ticket at the Prada Transformer on the Gyeonghui Palace grounds.