A race to the green finish line

A race to the green finish line 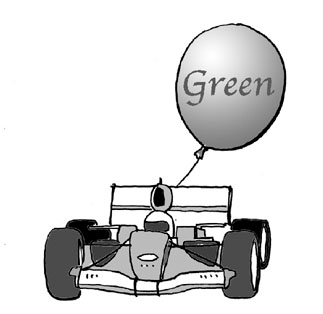 As the sun fell on the French city of Rouen on June 22, 1894, people from all over Europe stood with baited breath in the grandstands to see which car would take the checkered flag in the first-ever competitive car race organized by the Paris magazine Le Petit Journal.

Speeding toward the finish line was the Marquis de Dion driven by Comte Albert de Dion. The steam-powered car cruised the 123-kilometer (76-mile) route from Paris to Rouen at an average speed of 18.7 kilometers per hour. However, the steam-powered car was disqualified for violating a couple of rules, meaning the champagne had to be put back on ice until the winner’s trophy was awarded to the gasoline-powered Peugeot driven by Panhard et Levassor.

Besides heralding in the era of car racing, this race marked a monumental engineering shift in the automobile industry from steam to petroleum power.

The disqualification of de Dion’s venture was also an upset for his partner George Vuitton, an engineer who helped to develop steam-powered cars.

The latter took up the family business after the death of his father Louis Vuitton, founder of the luxury travel bag company, but without relinquishing his passion for cars. The creator of the LV signature monogram also designed the first car trunk. He created the backseat picnic case, car tool box and other auto accessories. He designed sand- and dust-resistant duffel bags during a trip to Africa in 1924 and a car-bed trunk during a voyage to China in 1931.

Although racing may have had a mild impact on the luxury brand industry, it definitely shaped the automobile industry.

As the highest class of car racing, Formula One - whose name refers to the rules cars and participants must comply by - has a 59-year-old history that has revolved around a rigorous tug-of-war between race rules and engine technology. Circuit promoters and race organizers present a set of regulations on vehicle weight and speed limits. Engineers challenge these rules with ingenuity. Promoters then toughen the rules, only to be toppled again by new engineering technology.

The ongoing challenge and inspiration that has shaped car engineering into a kind of artistry has kept automakers spending millions of dollars every year to operate their own F1 teams.

The 2009 Formula One British Grand Prix has just finished in Northamptonshire, England. This year’s challenge had been to see who could go the farthest and fastest on limited fuel, propelling the introduction of hybrid technology on race tracks.

Korea will host Formula One races in 2010.

We hope to see Formula One make new history on Asia’s longest circuit in Yeongam, South Jeolla, with a compelling competition among eco-friendly hybrid cars.