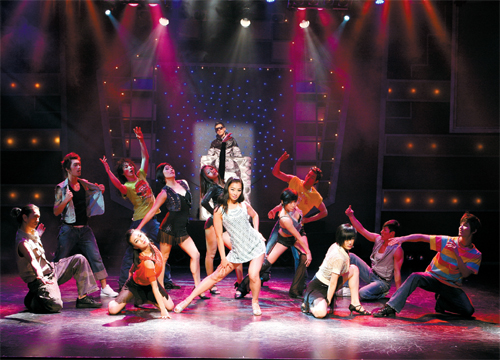 A scene from the musical “Sachoom.” Provided by the organizer

Performances that mix diverse dance styles such as hip-hop, jazz and pop rocketed into the mainstream a couple of years ago.

But many of those nonverbal shows flamed out just as quickly, largely because they focused on style over substance by relying too heavily on flashy dance moves at the expense of solid story lines.

And then there’s “Sachoom,” a lively, nonverbal, interactive dance musical that has managed to buck that trend. Sachoom is an abbreviation of the Korean phrase sarangha-myeon-chumeulchueora, which means “dance if you are in love.” And that’s exactly the attitude these exuberant performers take.

The show, now in its sixth year, traces the lives of three characters by blending everything from hip-hop and contemporary dance to break dancing, tap dancing and martial arts moves.

It’s become a phenomenon in the local dance scene, where performances come and go in a matter of months. Audiences can’t seem to get enough.

“I hardly watch films or performances more than once, but I’ve watched this twice because it makes me feel alive,” a blogger nicknamed Cool Guy wrote in a post detailing his thoughts on the show.

After 700 performances, the show even has its own dedicated theater - a rarity in Korea. It’s also moving into the overseas market, traveling to Vietnam in mid-June for four shows. Previously, Sachoom received rave reviews and sold out all of its seats at the 2008 Edinburgh Fringe Festival and at the Japan-based Shinjuku Face Theater in 2007.

“Korea has a few famous nonverbal performances such as ‘Nanta’ that were invited by other countries [and performed free shows], but Sachoom was the first one that was staged as a paid show overseas,” said Park Hae-jeong, an official from Dobecom, a production company for the show.

So why has Sachoom thrived while so many similar shows have fallen by the wayside?

“The main spirit [of this show] is completing a story by collaborating with the audience,” said Choi Gwang-il, head of Dobecom.

Indeed, audience participation is actively encouraged throughout the 120-minute show. Performers move out into the crowd, bring people on stage and even shoot water guns into the audience, giving those in attendance an opportunity to shoot back.

Unlike other performances, audience members are also allowed to take pictures, record video and even dance in their seats right in the middle of the show if they so choose.