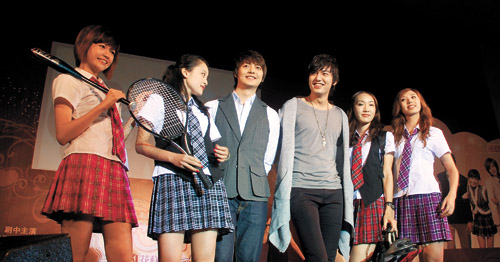 Lee Min-ho and Kim Joon, two lead actors from the Korean TV drama “Boys Over Flowers,” (third and fourth from right) meet Chinese fans in an event held in Guangzhou, China, on July 4 to celebrate the airing of the show in mainland China. By Kang Hye-ran

Last weekend, the cities of Guangzhou, China, and Tokyo, Japan, were abuzz over the appearance of young celebrities from Korea.

Hordes of ardent Chinese fans came out on Saturday to see two stars of a wildly popular Korean TV drama series, which made its debut in mainland China yesterday.

At the same time, Korean pop group Dong Bang Shin Gi (TVXQ) captured the eyes and ears of nearly 50,000 spectators at the Tokyo Dome ? a dream stage for every Japanese musician.

By all accounts, it appears as though the next Korean wave is sweeping over Asia. Korean dramas and music groups are drawing legions of fans in the region, further spreading the country’s culture beyond the Korean Peninsula. 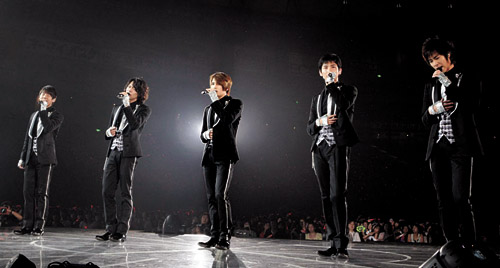 TVXQ performs for the finale of the “TVXQ Fourth Live Tour 2009: The Secret Code” on July 4 in front of about 50,000 spectators at the Tokyo Dome. Provided by SM Entertainment

The Guangzhou Holiday Inn Hotel held an event to celebrate the broadcasting of the Korean drama “Boys Over Flowers” in China. The drama aired yesterday for the first time in the Guangdong region, making its debut on Xingkong TV, the local broadcasting channel of Hong Kong Star TV. Two hundred people were invited to attend the official fan meeting through an online drawing.

Earlier in the day, fans wanting to see two stars from the drama ? Lee Min-ho and Kim Joon ? formed a long queue at the airport, anxiously awaiting their arrival. Even after the actors used a separate passageway for safety reasons, about 500 devoted fans stayed.

“I came all the way from Chongqing early this morning just to see them, but I wasn’t able to,” said one tearful woman, adding that she had been waiting for this day for the past several months.

Prior to the airing of the show in China, Star TV recently aired Japanese and Taiwanese versions of the drama ? both made before the Korean version ? in order to raise public interest.

The Taiwanese version, made in 2001 under the title “Meteor Garden,” was a huge success in China. Many of the questions asked during a press conference before the fan meeting revolved around those versions.

When asked if he saw the Taiwanese version of the show, Kim replied that he had watched it “long before I was offered the part in Boys Over Flowers, and I had wished that I could join the cast.”

Lee also said he was surprised by the fan reaction to Boys Over Flowers in China, considering the show hadn’t even aired yet.

“I couldn’t imagine that there would be such great interest in our drama in China even before the telecast,” he said.

“While there hasn’t been a [Korean] hit show with an audience rating of around 50 percent after ‘Dae Jang Geum’ and ‘Full House,’ Boys Over Flowers seems to be the next strong contender as it is capturing the attention of young people here,” GTV’s Korean regional director Yen Sochiang said.

At 6 p.m. the same day ? and miles away in Japan ? Korean pop group TVXQ appeared on stage at the famous Tokyo Dome.

It was a crowning achievement for the band, as it took four years for it to grab a solid foothold in the country despite being one of the most popular groups in Korea. Members who appeared on stage did not hesitate to hide their excitement.

“It was our dream to stand on this spot ever since we came to Japan,” one band member said, addressing a stadium filled with 50,000 fans waving red glow sticks. “And now, today, we fulfill that dream.”

The group’s performance started out with the song “Secret Game,” a highlight of their fourth album, which was released in Japan in March.

Dressed in black suits, the five TVXQ members ? Xiah, U-Know, Hero, Max and Micky ? took the stage to deafening cheers from the crowd.

During the entire three-hour set, the audience was standing, singing along.

The group sang a total of 31 songs, including their new single, “Stand By You,” released on July 1, as well as others that have been successful in Japan, such as “Purple Line,” “Mirotic” and “Wasurenaide,”

The group, known as Tohoshinki in Japan, also performed at the Tokyo Dome on Sunday. The two concerts marked the finale of the “TVXQ Fourth Live Tour 2009: The Secret Code,” which visited nine cities in Japan.

Along the way, the group reportedly drew 250,000 spectators, including a total of 100,000 at the two Tokyo Dome concerts.

TVXQ’s success in Japan shows that the Korean wave ? or hallyu, which started in Japan in the 1990s ? is resurfacing.

But unlike the previous version, which mainly involved exporting Korean content to Japan, TVXQ made its debut as rookie singers in Japan, singing songs in Japanese and appearing on local TV shows to gain popularity step-by-step. By doing this, Japanese fans feel both the “freshness” of Korean artists and the “familiarity” of the group, as the band resembles Japanese artists.

“Tohoshinki not only has the exceptional features, singing ability and dance skills that are expected of Korean artists, but also the language ability to sing and converse in Japanese,” said Yuki Kumasaki, 25, who attended the Tokyo concert. “It makes us feel closer to them than other Korean artists.”

As fan Ai Fukawa, 24, put it: “This is one of the hottest groups in Japan now, and it ranks extremely well with Japanese women and teenagers,”