From a securities firm to the big screen

From a securities firm to the big screen 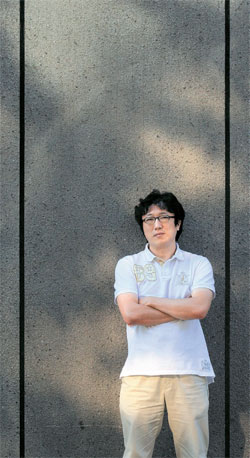 An ambitious young Korean graduates from a science high school, studies industrial engineering and then takes a job at a major domestic securities company.

Longing for something else, he leaves to study film in the United States, eventually returns to his home country and makes two films that vault him into the list of up-and-coming directors.

It’s a story line fit for a movie itself. But this is not fiction, it’s the tale of 37-year-old Korean director Roh Gyeong-tae, who is quickly making a name for himself in the movie industry.

After studying at the Korea Advanced Institute of Science and Technology, Roh eventually worked for two years as a securities dealer before leaving for the United States to study film. 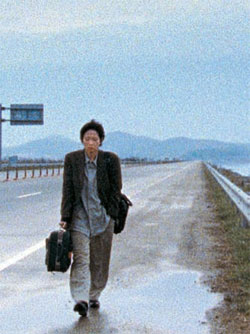 It wasn’t necessarily an impromptu decision, though, as he had long had dreams of making a film like “Batman.” In the United States, Roh studied experimental films at Columbia College in Chicago and the San Francisco Art Institute, which opened his eyes to an area of the movie world that he hadn’t known before.

Having only made two films, Roh is still a rookie. But the reception his movies received laid to rest any doubts about his decision to make such a sudden turnaround in life.

His first feature, “The Last Dining Table” (2006), won the Grand Prix at the Seoul Independent Film Festival and the NETPAC Award at the Pusan International Film Festival, both held the same year the film was released.

“Land of Scarecrows” (2008), his second feature, was invited to the Berlin Film Festival early this year and was also screened last month as part of the ACID program at the 62nd Cannes Film Festival. The program selects nine independent films from around the world and supports their release in France and abroad.

There are three main characters that appear in Land of Scarecrows, which was co-produced by Korea and France. The movie features a Filipina who came to Korea in search of the “Korean dream,” a Korean transgender suffering from the harmful effects of a landfill and a boy who was adopted from the Philippines and brought to Korea. The development of the story is not exactly easy to follow. Words are scarce, and the scenes play out relatively slowly.

“Audiences tend to think that a movie is difficult when they cannot easily understand the story or the story develops in an unexpected way,” Roh said. “I would say my films are sort of in the style of [video artist] Paik Nam-june because you don’t necessarily have to understand the plot of his works to enjoy his video art. I hope that people will enjoy my films with the mindset that they will get to know more about me and my world.”

Roh said he wants to “present audiences with an unforgettable artistic experience,” like Paik and international directors such as Andrei Tarkovsky and Robert Bresson.

Roh certainly has a unique method. He finishes the story line in about a week once he maps out characters for a film. However, it takes him about a year to link the characters together.

“I have this habit of making a note of various images taken from almost everything I encounter in my everyday life. Shooting a film is the process of connecting characters with those images I came up with,” Roh said, adding that he has already mapped out characters for his next film “Black Stone,” a story based on the 2007 Taean oil spill.

The director said he is particularly interested in “outsiders” in society, such as the sexual minorities, adoptees and migrants in Land of Scarecrows. “Memories from my childhood, which was not affluent, and those years I spent in America where I felt non-white people are treated like they are invisible have made me interested in the minority.”