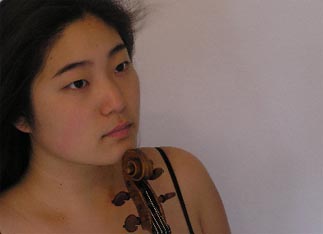 An Asian woman stands on stage with a violin, an orchestra behind her and a full house in front. But that doesn’t seem to unnerve her.

With powerful bowing technique and an expressive face, she plays the third movement of Beethoven’s Violin Concerto in D major, Op. 61. After she finishes playing, the crowd claps, and, finally, a cautious smile spreads across her face as she takes her bow with confidence.

This was 21-year-old Korean violinist Kim Suyoen performing in the finals of the Queen Elisabeth International Music Competition in Brussels, Belgium, this May. She placed fourth in the competition, one of the most prestigious classical music competitions in the world.

Only a handful of Koreans have had the honor of winning the competition, including composer Cho Eun-Hwa, who won the Grand Prize last year, and violinist Bae Ik-hwan, who won the second prize in 1985.

“Although I do have regrets about not winning the grand prize, I am very honored to have won fourth prize,” Kim said. “More than anything, I’m glad it’s over.”

The young violinist certainly captivated the audience, exuding a kind of grace and composure uncommon in one so young.


Kim was born in the small city of Muenster, West Germany, in 1987 to a Korean couple struggling to support themselves. Her father, Dong-wook, and mother, Kyeong-suk, had come to West Germany to study theology.

Kim was a born musician, and her parents recognized her talents early. She began playing the violin at the tender age of five.

When she was nine, Kim gained admission to the Academy of Music Detmold, Department Muenster. She was the youngest student to be accepted to a German conservatory. In 2004, she enrolled at the Music Academy Muenster. She now is a postgraduate student at the University for Music and Performing Arts in Munich.

Kim’s musical career may seem somewhat out of the ordinary to some. She was able to develop her talents with relatively little cost to her family thanks to the German public education system, which assumed much of the expense for her training.

When Kim’s father, who was working on his dissertation at the time, suffered a cerebral hemorrhage in 1995, the family? her father, mother and two siblings ? had to rely on subsidies from the German government to supplement their income.

Kim’s story has prompted many Koreans to reflect on the education system here, with some wondering whether Kim would have been able to develop her musical talent had she been born and raised in this country.

In Korea, classical music education is often deemed a privilege for the wealthy. Had Kim’s family been living in Korea when her father’s medical condition struck, it is difficult to say whether Kim would have been able to continue her musical training.

Next month will be a busy one for Kim. She is set to perform in Seoul with six other young musicians under the baton of Chung Myung-whun. She will also release her third album.