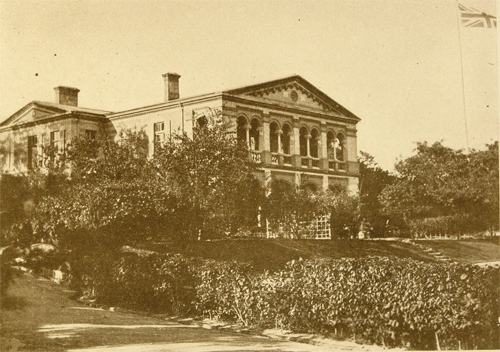 The Number One Building in the British Embassy compound has served as the British ambassador’s residence since 1892.

The weather was treacherous.
On the day of this reporter’s recent visit to the British Embassy Compound, located north of Deoksu Palace in central Seoul, rain was pouring down as if there was a hole in the sky.

But the trip certainly proved worth all the trouble.

Passing through the iron gate decorated with a traditional Korean tile roof, the light gray, featureless embassy building, erected in 1992, stood tall. Behind it were the two buildings that had brought me here in the first place, waiting in silence to show themselves.

“Here it is, the Number Two Building,” said Julie Lee, the political and public affairs officer at the embassy, who was to show me around.

The Number Two building, a two-story red-brick structure, presented itself to me, its eaves still dripping with rain. Completed in May 1892, the building functioned as both residence and office in its early years, and then as just a residence in later years.

Passing through an outdoor swimming pool, a tennis court and a garden maintained in an almost impeccable state, the Number One Building, or the ambassador’s residence, came into view, situated on slightly higher ground. Also completed in May 1892, the building has served as the house of the head of mission ever since.

Considering that both buildings are over 100 years old, and with special regard for all that Korea went through during that period ? foreign invasion, war and industrialization ? the sight of the two buildings was a delight. 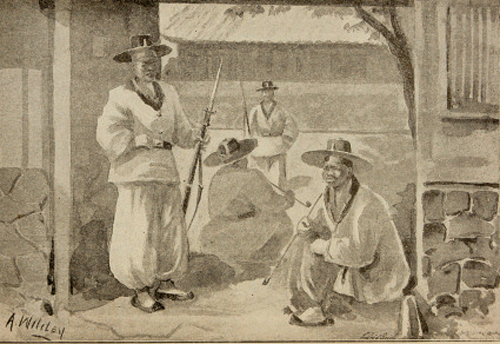 A late 19th-century illustration of soldiers guarding the entrance to the British Embassy.

British interest in the Hermit Kingdom dates to the late 18th century.

“A number of British vessels like the Providence, the Alceste, the Lyra, the Lord Amherst and the Samarang tried to initiate commercial relations with Korea in the late 18th century, but there wasn’t much progress,” says Lee Heon-ju, a researcher at the National Institute of Korean History.

Lee argues that although Korea’s reclusive policy is partially responsible for the lack of progress in bilateral relations between the two countries, Britain was also more interested in the Chinese market as far as trade with the Far East was concerned.

But with other Western powers eyeing closer ties with Korea, like the United States and Russia, Britain also felt the need to strengthen its relations with Korea. This led to the first Korea-Britain treaty in 1882 and a renewed treaty in the following year.

It was then that William George Aston (1841-1911), the first British consular official in Korea, was ordered to find a site for the British Legation. After a few failed attempts, Aston decided that the house where he was lodging, a hanok, or traditional Korean house, was a good bet, as it was also for sale.

As Aston recorded in an embassy document, “[it was] within the walls of the city, between the south and the west gates, and about a mile from the palace, the Foreign Office and the Japanese Legation.”

The size was also decent, but the condition wasn’t. “The site is occupied by six separate buildings at some distance from each other, offering in all accommodation which may be considered equal to twelve European rooms,” Aston wrote in a letter on May 30, 1884. “All the buildings are of wood, old and in an indifferent state of repair.” 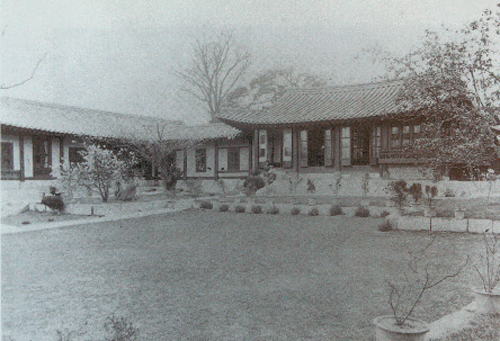 The property George Aston (1841-1911), the first British consular official in Korea, purchased in 1883 for his legation.Provided by Myongji University-LG Yeonam Library

According to the “Study on the Construction Process of the British Legation,” written by architectural historians Kim Gap-deug and Kim Soon-il, there were very few Western-style structures in Korea at the time of the construction of the new British Legation buildings; thus the construction process, which was delayed because some of the materials had to be shipped all the way from Britain, drew a considerable amount of interest from the foreigners in the country at the time.

The buildings are thought to be the fourth Western-style structures in Seoul, after the Seoul Telephone Office (built in 1886), the Pai Chai School (1887) and the Seoul Catholic Miter’s Office (1890), the report says.

Designed by British architect F. J. Marshall, the structures embody a mix of Western architectural styles ? Georgian, Victorian and Gothic, among others.

“It is most important that the iron work demanded from England be sent here immediately so that the roof may be concreted in before winter if possible,” Marshall reported to Britain on July 2, 1890.

Both the Number One Building and the Number Two Building were completed in May 1892. Although not as grand as the British legations in other countries, the buildings were meaningful in that they laid the foundation for British architecture in Korea, architectural historians note.

What’s interesting here is that, according to embassy documents, it wasn’t just the diplomatic community that took interest in the new British legation buildings. Gojong, the 26th king of the Joseon Dynasty (1392-1910) and the first emperor of the short-lived Korean Empire (1897-1910), also had a keen interest in these structures. It is reported that he requested to see plans and photographs of the buildings.

Historians say the king’s interest led to the construction of other Western-style buildings within the palace compound in later years. 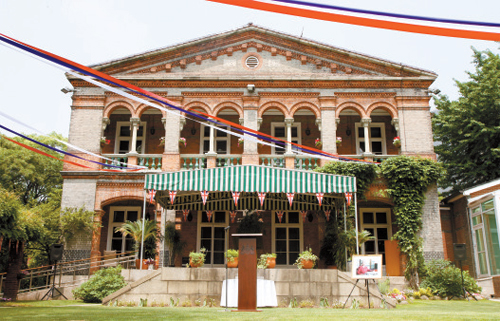 Today, the British Embassy compound plays host to a variety of events, with one of the most important being the Queen’s Birthday Party. The picture below left shows the Number One Building decorated for this year’s event, June 4th.Provided by the British Embassy in Korea 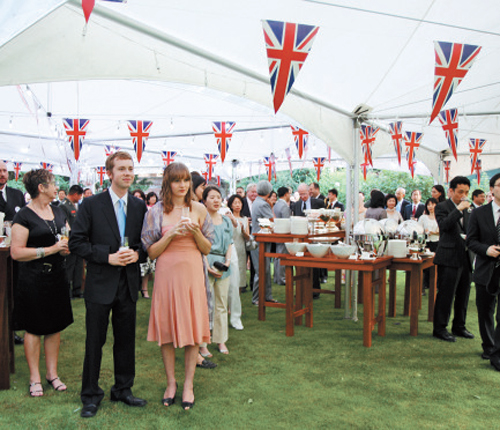 This picture is shows participants celebrating in the garden. Provided by the British Embassy in Korea

During the Korean War (1950-1953), the British Legation operated in southern cities including Daegu and Busan, and the legation buildings in Seoul remained largely unused.

“I passed through Seoul for the first time in six months about ten days ago and took the opportunity to go and have a look at the legation buildings. [...] Although the decorations and woodwork may suffer from the weather, the main shells of the buildings were practically indestructible,” wrote F. M. Hill, an officer with the Royal Engineers in a letter in February 1953.

Once the war ended with the signing of the armistice, the British delegation, led by Minister Walter Graham, returned to Seoul from Busan. Following its restoration, the British legation in Seoul reopened in January 1954.

Over the next several decades, as Korea-Britain relations warmed and bilateral exchanges increased, the work of the British Embassy in Korea and the number of staff at the mission has grown as well. This has led to the construction of several more structures within the compound.

Although the additions have enlarged the compound and changed its appearance, the compound is still the venue for events hosted by the British Embassy in Korea, as it has been for more than century.

A comment by James E. Hoare, professor of languages and cultures of Japan and Korea at the University of London and a former British diplomat in South and North Korea, well underscores the sentiment the compound evokes.

“In the crowded city of Seoul, it is amazing that this tract of relatively open land has survived the upheavals of the last hundred years. The older houses may not seem beautiful, but in Seoul they are a reminder of the days of gunboats, consular courts and all the trappings of what was ‘treat port life’ even when the nearest seacoast was many miles away,” Hoare wrote in the book “The British Embassy Compound Seoul.”