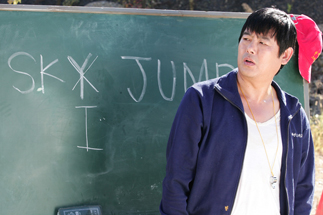 Coach Bang (Sung Dong-il) is slightly confused about how to spell his sport’s name.[CineSeoul]

Watching “Take Off” is like seeing a football match where one team engineers a come-from-behind win: the excitement begins just when you think it’s all over.

The film focuses on Korea’s oft-overlooked national ski jumping team. Those who enjoyed the 1993 U.S. movie “Cool Runnings” will find themselves smiling at familiar moments.

Like that film, based on the true story of the first Jamaican bobsled team to make it to the Winter Olympics, Take Off (or “Gukgadaepyo” in Korean) tells the emotional story of South Korean ski jumpers who struggle against both national indifference toward the sport and their own personal challenges.

Partly non-fiction, the film spotlights a hodge-podge team assembled to support the Korean city of Muju’s bid for the Winter Olympics in 1996. At the time, the International Olympic Committee questioned how Korea could host the Winter Olympics without even having a ski jumping team.

Led by a former children’s ski instructor who knows nothing about the sport - he spells it “sky” jumping - the team’s five athletes include a Korean-American adoptee and former U.S. junior alpine skier (Ha Jeong-woo) who comes to Korea looking for his biological mother, a nightclub host (Kim Dong-wook) who joins the team because he has a crush on the coach’s daughter, and a young orphan (Kim Ji-seok) who is the sole breadwinner for his grandmother and younger brother.

Inexperienced, unprepared and a laughingstock at home and abroad, the team grows from its hapless and rag-tag beginnings to become passionate and competitive, finally winning a berth at the Nagano Olympic Games in Japan.

As sports films often do, Take Off concentrates on the emotional side of the characters as they struggle to set aside personal conflicts and form a bond.

But director Kim Yong-hwa, creator of the 2006 box office hit “200-Pound Beauty,” overdoes it a bit. With so many episodes crammed into the film - from issues of ethnicity and family to romance and poverty - Take Off barely manages to retain its sports film label. A tendency of the actors to over-emote also distracts from the plot.

The film takes a relieving turn in the last 30 minutes, however, as the Olympic Games begin. Pulling audiences to the edge of their seats, the film shows the power of sport to captivate and excite viewers - even if the event itself is fictional. Yonhap