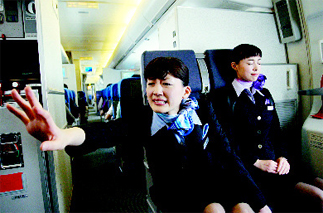 Japanese director Shinobu Yaguchi has a huge fan base not only at home but also here in Korea, primarily for his comedies such as “Waterboys” and “Swing Girls.”

Generating laughter through his feel-good “zero to hero” films, Yaguchi has developed a reputation as one of the most amusing filmmakers in Japan.

Now, Yaguchi is hoping to rocket to success again with his new comedy “Happy Flight,” which is currently playing in local theaters.

The movie focuses on a novice pilot (played by Seiichi Tanabe) and a fledgling flight attendant (played by Haruka Ayase), painting a lively, humorous picture of all aspects of the aviation world ? even accidents. It also incorporates a cast of characters that includes mechanics, control tower workers and even an avian-control team. Yaguchi wrote the screenplay after two years of research and interviews with roughly 100 aviation-related personnel. With the full support of All Nippon Airways (ANA), the director was able to use a host of aviation-related facilities in the film, including a Boeing 747, a control tower, a hangar and a runway. 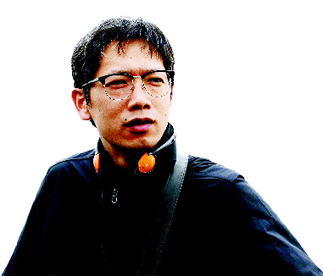 In an e-mail interview with the JoongAng Ilbo, Yaguchi touched on everything from his inspiration behind the film to character development. Following are excerpts of that interview.

Q. I heard you had a Hollywood-style suspense movie in mind at first?

A. Since I was a kid, I always loved flight adventure movies from Hollywood. So I have wanted to make such a movie for a long time.

But the direction of the story was settled while I was doing research for the film. A flight is not something that can be handled by one person. It requires the efforts of many different people, and it is crucial that they act professionally within their given roles.

An accident also is not the fault of just one person. I found this aspect very interesting and thought that focusing on this would help me create a flight-related movie totally unlike the ones that have come before.

Was the support from ANA a big help?

When I heard of ANA’s decision to help us, I knew this project would be successful. ANA let us borrow an actual Boeing airplane for 15 days. Excluding the cockpit scenes, which were shot in a studio, everything else was filmed on-site. An in-flight shoot, however, was more difficult than I expected. Unlike a set, you can’t change the seating arrangements or take out an entire wall for shooting purposes.

The area where the cast and crew could move around was limited to two small aisles. Nevertheless, it was an extravagant experience for sure.

Through “Swing Girls,” you discovered actress Juri Ueno. Now, Haruka Ayase has come into the spotlight.

I first thought of Haruka as just a pretty face with some acting skills. However, after meeting her in person, I was drawn to her extremely natural aura. When I first met her, I asked her to do an impromptu scene of meeting her parents at the airport. She was so good at it that I decided to cast her. Haruka was perfect for the role, as I wanted to portray the spiritual growth of the character in the setting of a short, one-day flight.

The characters in your films are very “human” in that they make errors, and that seems to excite compassion and sympathy from audiences.

It is probably because I myself am not perfect and flawless. I have aspirations to show that such characters grow in a movie. Plus, I am a laughter-addict. There is no way that my films would lack a sense of humor.