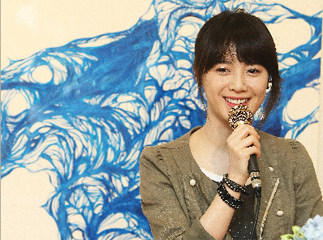 Koo Hye-sun speaks at the opening of her art exhibition “Tango,” which was held July 1 to 7 at Gallery La Mer in Insa-dong, Seoul. [Yonhap]

Koo Hye-sun, the 26-year-old rising actress from the recent hit TV drama “Boys Over Flowers,” has embarked on a new career as a filmmaker. Her debut film, titled “The Madonna,” was screened at this year’s 13th Puchon International Fantastic Film Festival, which ended last Sunday.

The film tells the story of a priest who assists in mercy killings of people seeking salvation. Jung Seung-hye, a famous movie producer who died from colon cancer in May, co-produced the film, which won an audience award at the 2009 Busan Asian Short Film Festival.

Koo now hopes to hit her stride as a director with the shooting of her first feature movie, tentatively named “Magic,” starting in November. She recently pursued other ventures, too. The versatile Koo published a novel titled “Tango” in April of this year and held her own art exhibition under the same name earlier this month.

In a recent interview with the JoongAng Ilbo, Koo talked about her foray into other areas aside from acting and also revealed her future plans. Following is the text of that interview, edited for space and clarity. 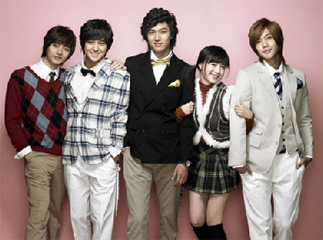 A. I just wanted to talk about a human’s choice, rather than discuss death or religion, through this film. I found the idea of having a priest as the main character interesting because religion is a domain laden with lots of taboos.

What made you venture into filmmaking?

It’s not like I dreamed of becoming a filmmaker since I was young. I’m interested in many things, including music, art and literature, and I thought I could incorporate all those things by making a film. I met Jung [the film’s producer] two years ago and wrote a dozen scripts for a feature to show her and get her comment on them. She rejected all of them and instead recommended that I start with a short film. So The Madonna came into being through three days of shooting while I was participating in the TV drama “Choigang Chilwoo” in June of last year.

You seem to have had a special relationship with Jung.

I’m welcomed wherever I go after my appearance in the series Boys Over Flowers due to its popularity, but the situation was quite different until two years ago. However, I still dared to go and see Jung to show her my scripts, which she accepted without any prejudice. There were also times when I thought of giving [filmmaking] up, but she encouraged me to continue. Publication of the novel Tango was also possible with the help of Jung ... I was told of Jung’s death on the phone when I tried to express my thanks to her after I received an audience award at the Busan Asian Short Film Festival. She was a great teacher for both my career and my life.

Tell us about your future plans.

In addition, I plan to write music for the movie, so now I’m studying the [cello]. I know there is still prejudice against actors-cum-directors, but I ask audiences to view my work with an open mind. I’d like to make films that transcend generations. Koo Hye-sun, the actress, doesn’t fit the script I’ve written. One of my dreams as a director is to work with actress Jun Ji-hyun some day.