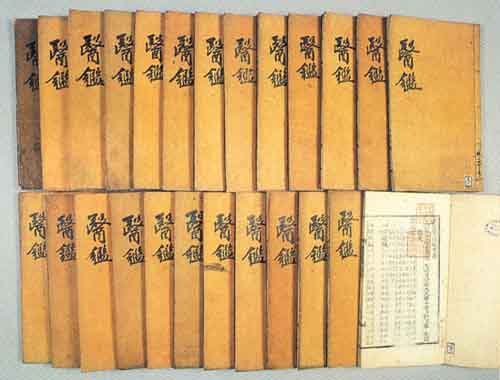 The medical book “Donguibogam” has been added to Unesco’s Memory of the World Register. The 25-volume encyclopedia on Eastern medical principles was written in 1613 by Heo Jun, a Joseon dynasty doctor. [JoongAng Ilbo]

Korea’s Cultural Heritage Administration said yesterday that the ancient medical encyclopedia “Donguibogam” has been added to Unesco’s Memory of the World Register.

Along with Donguibogam, the United Nations Educational, Scientific and Cultural Organization added 34 items of documentary heritage from other countries to the list at a meeting of its International Advisory Committee in Bridgetown, Barbados, held from Wednesday to yesterday.

The list of new items includes Anne Frank’s diaries (Netherlands); the Magna Carta, a British legal charter issued in 1215; and “Song of the Nibelungs,” a heroic poem from medieval Germany. 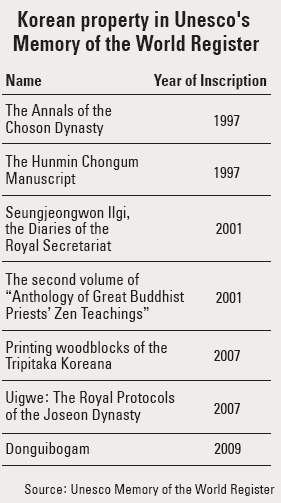 Unesco’s Memory of the World Program seeks to preserve documentary properties and library collections from around the world. The International Advisory Committee meets every two years to assess nominations from UN member countries.

With the latest addition, there are a total of 193 items from 83 countries in the register.

Korea has been working to add the medical volumes to the list since 2007. Donguibogam is designated Korea’s Treasure No. 1,085 and is housed at the National Library of Korea and the Academy of Korean Studies.

According to the Cultural Heritage Administration, Unesco had high regard for Donguibogam as a compilation of all medical practices in the East Asia at the time. The work was also noted as a reflection of the state’s determination to document the principles of preventive medicine and establish a public health care system, ideas that in 1613 were centuries ahead of their time.

The designation also boosts Korea’s efforts to promote Korean traditional medicine to the world. The Korea Institute of Oriental Medicine will host the International Oriental Medicine Expo in 2013 to commemorate the 400th anniversary of the Donguibogam, and is currently translating it into English.

The National Library of Korea plans to hold a special exhibition and related academic forums focused on Donguibogam in September.

Korea has seven documentary heritage items in Unesco’s Memory of the World Register, including The Annals of the Joseon Dynasty; Uigwe: The Royal Protocols of the Joseon Dynasty; and the woodblocks of the Tripitaka Koreana. The country has the seventh-highest number of items on the list in the world and the most in Asia. Germany has the most items on the register overall, followed by Austria and Russia.