Korea’s love affair with baseball stronger than ever

Korea’s love affair with baseball stronger than ever 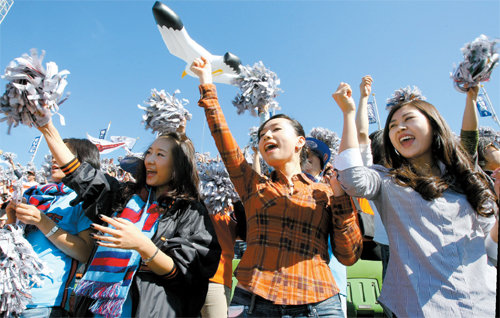 At the same Samsung-Lotte game, Giants fans give a cheer.[JoongAng Ilbo]

On a recent Sunday evening, fans gathered at Miller Time bar in Seoul’s Gwanghwamun neighborhood to watch the Kia Tigers play the Hanwha Eagles. Park Seung-won, a student at Suwon Science College, came with his friends to cheer on Kia.

“I always thought Korean baseball teams were pretty awful compared with teams elsewhere in the world, but their performance in the last two World Baseball Classics changed my mind,” Park admitted. “I like watching baseball games more now.” 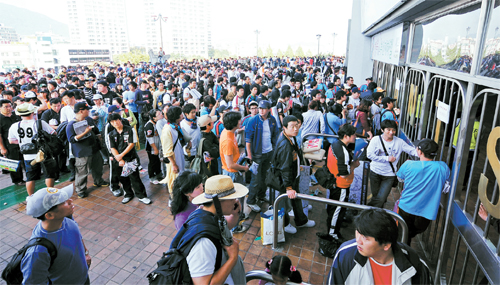 Crowds swarm the stadium in Busan for a Samsung Lions-Lotte Giants game in October 2008.

While Park’s interest in baseball is not new - he’s been watching since he was little - he represents Korea’s most recent obsession with baseball.

“I’ve been to six games already this season,” Park said. “Every time Kia comes to Jamsil Stadium in Seoul I go to see them.” 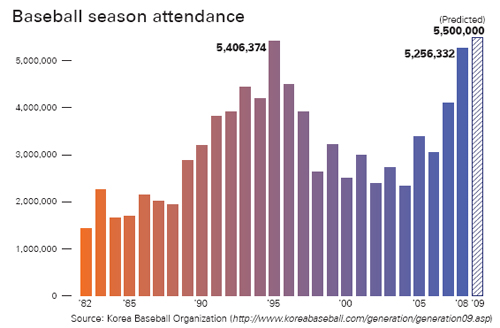 Just four months after Korea took second place in the World Baseball Classic and one year since it took the gold at the Beijing Olympics, baseball has become one of the most popular sports in the country.

Encouraged by the 2008 season’s attendance rates, the KBO added 28 games to the 2009 baseball season. That means fans can watch their teams play seven more games each this season.

Park says the KBO also expects an increase in women and families attending games due to marketing efforts by individual teams targeting those demographics.

Baseball observers, including Park, say that a major reason for fans’ increased enthusiasm is the fact that Korean baseball players have improved their skills markedly in recent years.

Teams are more competitive within Korea this year, just as they were when baseball last saw a spike in popularity, in 1995.

In that year, fans flocked to the stadiums to watch three teams aggressively vie for the pennant. The Doosan Bears, LG Twins and Lotte Giants were neck and neck that year, and they had the highest game attendance rates of all the teams.

This year has also seen the heavy competition of teams for the Korean pennant. The SK Wyverns, Doosan Bears, Kia Tigers and Lotte Giants have similar win records thus far this season.

Korean ballplayers have proved that they are world-class athletes at major international competitions in the last three years. In 2006, Korea was a semifinalist in the World Baseball Classic. They went on to win the gold medal at the 2009 Olympics, beating Cuba and the United States. This March they took second to Japan in the 2009 WBC.

LG Twins pitcher Bong Jung-keun has watched firsthand Korean ballplayers become more adept in recent years. Bong left Korea and played in the U.S. for the Atlanta Braves and Cincinnati Reds between 2002 and 2004. He started playing for the Twins in 2006.

“A few years ago football was the most popular sport in Korea, but now it’s baseball,” he said. “Korean baseball players have gotten much better recently and we’ve become more popular among fans.”

Bong, 30, grew up watching professional baseball wishing he could one day be like the KBO players he admired. Now he is a star in his own right. He pitched for Korea in both the Beijing Olympics and the 2006 and 2009 World Baseball Classics. He was an All-Star player in this year’s Classic.

“Ever since the World Baseball Classic, fans are always waiting for players late after the game and asking us to sign autographs and take pictures with us,” Bong said. “More people recognize me on the street and people are always coming up to me to ask for autographs out in public. It’s fun. I like it.”

People outside of Korea have also noticed how competitive Korean ballplayers have become.

Aaron Shinsano writes about Korean baseball on the blog EastWindupChronicle.com and has scouted for the Chicago Cubs in Korea for two years.

“Cubs fans are interested in Koreans because they are good baseball players,” he said. “Korean teams spend a lot of time practicing and it shows.”

More American teams are paying attention to the talents of Korean baseball players. Shinsano says that he has seen a marked increase in international scouts at Korean ball games this year.

So far this year, Major League Baseball has signed five Korean high school baseball players. That’s up quite a bit from previous years. The first Korean-born baseball player to play in the MLB was Park Chan-ho for the LA Dodgers in 1994. Currently there are only two Korean-born players in the MLB.

One of the reasons that the recent surge in baseball’s popularity is so impressive is that it came after a 12-season lull in attendance. The record for annual attendance was last broken in 1995 with 5.4 million fans coming out for games. Between 1995 and 2008, the KBO struggled with attendance and did not reach the 5 million mark again until last year.

The KBO’s Park points to the Asian financial crisis as the main culprit for the decline in turnout in the late 1990s and early 2000s. He thinks that with less money to spend, fans cut baseball games out of their budgets.

Yet the current economic troubles seem to not be affecting game attendance as such.

The KBO is confident that they will reach a record high attendance of 5.5 million this season thanks to the increased attendance and the additional games played this year.

The recent heights of baseball’s popularity are staggering given baseball’s humble start in Korea. A professional baseball league did not emerge in Korea until the early 1980s. Before then, the game was popular among students but did not hold widespread popularity.

An American missionary named Philip Gillett is credited with introducing baseball to South Koreans in 1905. Colonial Japan was a more significant importer of this “all-American” sport, however.

Baseball began to catch on in Korea in the summer of 1909, when a group of Korean students who had studied and played the game in Tokyo decided to form a baseball club. When the students’ team won a large-margin victory against a team made up of foreign missionaries, they decided to tour Korea and hold games across the country. The tour galvanized interest in the sport nationwide and is considered an early turning point in Korean baseball.

According to Joseph A. Reaves, director of international operations for the Los Angeles Dodgers and author of “Taking in a Game: A History of Baseball in Asia,” baseball is tied to Japan’s annexation of Korea.

“For example, one of the first social organizations established to try to restore calm after the bloody March 1 uprising against Japan’s colonial rule was the Chosun Amateur Athletic Association, which, among other things, was dedicated to promoting baseball as a means of creating greater harmony,” Reaves notes.

Reeves says baseball was used in those early years by the Japanese occupiers as a means to undermine traditional Korean values and studies. For instance, Korean history classes were replaced with athletics classes that promoted baseball enthusiastically.

While the Japanese were using baseball as a tool to repress Korean nationalism, Koreans saw an opportunity to use the game in another way.

Baseball became a popular outlet for those wishing to challenge the Japanese occupation.

Kim Hyeon-seok dramatized the importance of baseball to Koreans as a form of resisting the Japanese in his 2002 film “YMCA Baseball Team.”

Although professional baseball teams were not created in Korea until 1981, the KBO’s origins also had political significance in Korean history.

“From its birth in December 1981, there never was any doubt one of the primary objectives of the KBO was to provide an easily controlled outlet for restless, and increasingly rebellious, elements of society - particularly young males,” Reaves said.

Former President Chun Doo Hwan developed the KBO as part of his “3-S policy” that promoted sex, sports and the screen. Chun’s policy was meant to salvage his falling popularity and distract the public from such atrocities as the 1980 Gwangju massacre.

The Samsung Lions and MBC (now the LG Twins) competed in the first professional baseball game in Korea on March 27, 1982. That first game was sold out, and President Chun himself threw out the first pitch.

The growing attendance at baseball games has highlighted what some say are the substandard conditions of Korean ballparks.

LG Twins pitcher Bong has been one of the most visible critics of Korean stadiums. Having played in the U.S., he sees plenty of room for improvement in Korean fields.

“The grass is really not good here. When I see grass in America, I want to slide on it - it looks comfortable. But here, sliding hurts because the ground is too hard,” Bong said.

He also points out that more measures to protect fans need to be taken. Foul balls often injure fans because there is not enough fencing up to prevent the balls from hitting them.

In response to Bong’s complaints, Park said: “The KBO has been checking the condition of stadiums once or twice annually. We are considering making a plan to improve the quality of the ground as well.”

Cities are responsible for the upkeep and construction of baseball stadiums. Both Gwangju and Daegu have announced plans to gather private capital to build new stadiums in the near future. Park notes that while most people working in baseball think that new stadiums are needed in both cities, the local governments are having a difficult time gathering the resources necessary to build them.

Bong says that the KBO has been making efforts to improve the stadiums, but there is still much to fix, especially when it comes to protecting game-goers.

“The KBO tries to listen and we’re seeing some changes. LG now has a visiting locker room, for instance, where we didn’t use to have one,” Bong said. “The fans are the most important thing, though, and we have to make sure we do everything we can for them.”