The first Protestant church in the country was built in 1898

The girl in the picture above is Pobai, 12, who lived in Korea sometime between the late 19th and early 20th centuries.

She is the main subject of the 1909 book “Daybreak in Korea: A Tale of Transformation in the Far East,” written by American missionary Annie L. A. Baird (1864-1916), and this picture of her is featured in the book.

“She was nearly twelve years old, with round cheeks that glowed red under the olive skin, and a heavy braid of glossy black hair hanging down her back.

“Only perfect cleanliness was lacking to make her a very wholesome little girl to look upon, but Pobai was almost always rather dirty,” Baird wrote.

“She would have liked to be clean, but so much of her time and strength went into helping her mother keep the men of the family immaculately clad, that she hardly ever had time to think of herself.”

In the book, Pobai is characterized as representative of the Korean women of the underprivileged class of the time, and an unfortunate one at that. 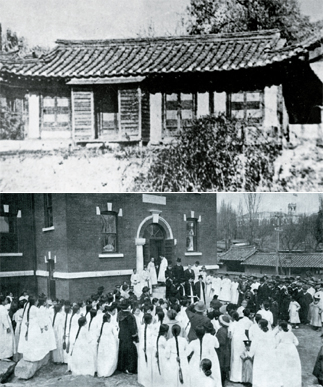 Pobai is forced into an arranged marriage at a very young age. She gives birth to a daughter at the age of 18 and is widowed soon thereafter. Although she struggles to save her child, she eventually loses her daughter to small pox.

As the caption suggests, Pobai is later converted to Christianity. The picture above captures the young woman on her way to church.

Pobai is characterized as representing the early Korean Christian population, while Baird is presented as a representative of the foreign missionaries who landed in the Hermit Kingdom, a place Baird describes in her book as a “Christless world.”

An increasing number of missionaries - Roman Catholic and Protestant - set their sights on Korea in the late 19th century.

“There is no national religion. Confucianism is the official cult, and the teachings of Confucius are the rule of Korean morality.

“Spirit worship, a species of shamanism, prevails all over the kingdom, and holds the uneducated masses and the women of all classes in complete bondage,” English writer Isabella Lucy Bird (1831-1904) wrote in her book “Korea and Her Neighbours” (1989). 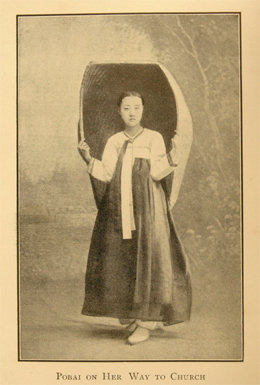 Pobai was featured as an early female Christian convert in Korea in a 1909 book about Christian missionary work here. Provided by Myongji University-LG Yeonam Library

Many foreign missionaries settled in Jeong-dong, Seoul, where most of the foreign legations in Korea were situated, because they were uncertain about how safe they would be elsewhere, historians say.

Looking at one of the earliest maps of the Jeong-dong area, presumed to have been drawn by Horace Newton Allen (1858-1932), an American diplomat and medical missionary, there were two distinct missionary compounds - one centered around the American Presbyterian Mission and the other around the American Methodist Mission. 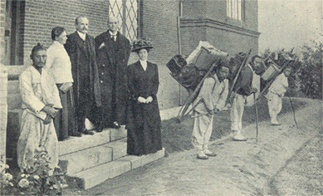 The Underwoods in front of their home. Provided by Myongji University-LG Yeonam Library

So it was here in Jeong-dong where the foreign missionaries of Korea lived. They include Horace Grant Underwood (1859-1916), the American missionary and educator who founded Yonsei University; Mary F. Scranton (1832-1929) who founded Ewha Womans University; and Henry G. Appenzeller, the first Methodist missionary in Korea and the founder of Chongdong First Church and Pai Chai University, both in Seoul.

Historical records show that these missionaries bought many hanok, or traditional Korean houses, belonging to people of high social status in the region.

One missionary, George W. Gilmore (1858-1933), wrote that because these houses occupied large plots of land, missionaries could easily transform them into comfortable, pleasant residences, with some establishing gardens and tennis courts on the grounds.

Angus Hamilton, an English journalist, noted that foreign missionaries arrived in Korea bringing large families with them and that they lived in large mansions. He also wrote that King Gojong (1852-1919) took particular interest in Underwood’s house and tried to buy it.

In the beginning, foreign missionaries held services and bible study classes in their homes, in empty warehouses and in abandoned temples. Appenzeller, for instance, held church services in his home beginning in 1885. His first service was attended by 10 people, records say, and there was a curtain in the middle of the space to separate men and women out of respect for the traditional custom in Korea.

As the number of Christian followers began rapidly to increase, foreign missionaries began to feel the need for larger churches. 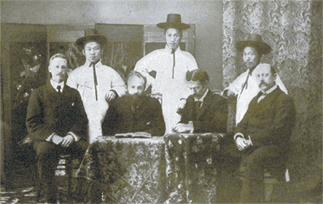 The board of bible translators led by Horace Underwood [JoongAng Ilbo]

“There are about 75 Protestant and 34 Roman missionaries in Korea, mostly in Seoul. After nearly twelve years of work, the number of baptized native Protestant Christians in 1897 was 777. The Roman Catholics claim 28,802, and that the average rate of increase is 1,000 a year,” wrote Bird in her book.

Appenzeller and his believers also decided to build a church in Jeong-dong in 1894, hoping to accommodate about 500 people. Appenzeller raised funds in the United States to pay for the construction of the church, an amount which is presumed to have been about $8,000 at that time.

In 1895, Appenzeller and his followers laid the cornerstone for the new church. To make way for the church, a medical facility run by Scranton had to be torn down.

The church, Chungdong First Church, was completed in 1898 and was the first Protestant church in Korea. The red-brick structure was designed in the Victorian Gothic style and the bell tower stood out as one of the most prominent structures in the area.

Allen praised the building as a structure that improved the look of the foreign settlement in Jeong-dong.

For this reason, the church also became known as the “yangban (high-class scholar) church,” the “nobility church” and the “high church.”

But even the “high church” could not escape the devastation of war. Chungdong First Church was destroyed during the Korean War (1950-1953), but was later restored. The Korean government acknowledged the church’s importance in the history of Christianity in Korea in 1977, when it was designated Historic Site No. 256.