More than meets the eye at Prada Transformer

More than meets the eye at Prada Transformer 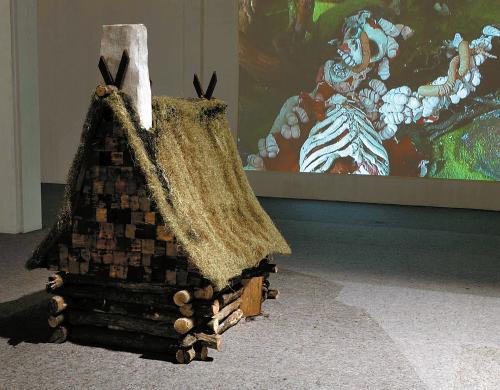 “Turn into Me,” by Nathalie Djurberg Provided by Prada Korea


The Prada Transformer, the shape-shifting structure in front of the ancient Gyeonghui Palace in central Seoul, has rotated for the third time ahead of its next event: a contemporary art exhibition.

Its floor, which took a hexagonal shape for a fashion event last spring and a rectangular shape for a film festival earlier this summer, is now cruciform.

The venue will display the work of Swedish artist Nathalie Djurberg from Friday to Sept. 13.

For the exhibition, titled “Turn into Me,” the interior of the Prada Transformer has been covered with a surface of white felt that ripples and twists to form a sensual wrapping in the High Baroque style.

Djurberg will aim to create a cave-like atmosphere of unconsciousness and dreams, projecting her animated videos on the white fabric wall of the Transformer and placing various felt-covered sculptures resembling objects such as a potato and small whales on the floor.

Some of the works were shown last year at the Prada Foundation in Milan. To maximize the dramatic effect of the Prada Transformer’s interior space, Djurberg decided to include two additional videos.

Djurberg received the Silver Lion award this year for the best young artist at the 53rd Venice Biennale, where she showed several short films featuring plasticine figures that move about to surreal and often grotesque narratives. The stop-motion technique she used for the films involves shifting the figures slightly in each individual frame, thereby creating the appearance of motion. The sets for these stories were constructed in a rudimentary fashion, while the narrative aims to evoke ambiguous feelings of anxiety and malaise.

Djurberg’s works are characterized by an obsessive rhythm. While they feature a sense of irony and humor, they also are said to convey a sense of nostalgia and sometimes unease and genuine anguish. These feelings are reinforced by the music that accompanies all of the artist’s works, written by the young Swedish composer Hans Berg.

Djurberg ? who lives and works in Berlin, Germany ? has emerged in recent years as one of the outstanding Swedish artists of her generation. She had solo shows at the Fondazione Prada in Milan, Italy in 2008; the Kunsthalle Wien in Vienna, Austria in 2007; and the Fargfabriken in Stockholm, Sweden in 2006.

Additionally, her videos have been shown at the Centre Pompidou in Paris in 2009; the Tate Britain in London in 2007 and the fourth Biennial of Contemporary Art in Berlin in 2006, among others. Her works are currently on display at the biennial exhibit in Venice.

The exhibit’s hours are noon to 6 p.m. on Tuesdays and Wednesdays and until 8 p.m. on Thursdays, Fridays, Saturdays and Sundays. The exhibition is closed on Mondays. Admission is free. Online reservations are needed in advance. For more information, call (02) 737-4772 or go to www.pradatransformer.co.kr.

“Turn into Me,” by Nathalie Djurberg. Provided by Prada Korea