A quiet retreat at a Korean temple

A quiet retreat at a Korean temple 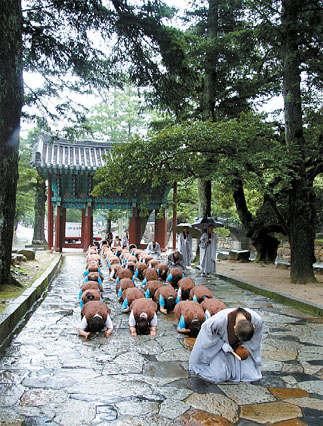 Every urbanite has at one time or another longed to get away from the exhausting routine of the daily grind. As a chance to relax in a beautiful natural setting while replenishing the mind and the spirit, temple stay programs have long been a popular option for travelers in Korea. More than 100 temples offer stays for students, office workers, foreign residents and visitors during the summer vacation season.

The temple stay itineraries are as diverse as the Buddhist sects themselves, but each one offers a chance to experience the daily life of a monk. Many start with pre-dawn yebul (ceremonial chanting), followed by activities that may include chamseon (seated meditation), 108 prostrations, samboilbae (a walking meditation with one prostration every three steps), dado (tea ceremony), early morning mountain treks and Dharma talks with monks. Most programs also offer barugongyang, traditional Buddhist meals served in wooden bowls.

The length of a temple stay varies from just one day to as long as the visitor wishes.

Magok Temple in Gongju, South Chungcheong, was built during the reign of the Silla queen Seondeok (632-647).

In June, the temple completed construction of a three-story building that will expand its temple stay program. The 24.4 billion won ($19.8 million) building includes educational and religious facilities and space for 300 people.

The programs at the temple also include group therapy sessions designed to relieve mental and emotional stress by exposing and releasing emotional and spiritual injuries. 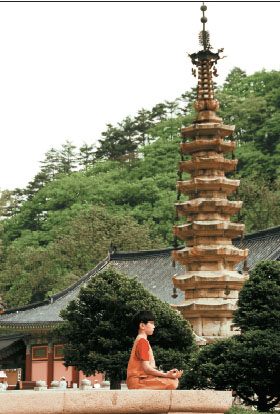 According to a temple administrator, temple stays can be healing experiences that give people ways to build better relationships with their families, their friends and themselves.

Near the entrance to Magok, there is a totem pole village, an outdoor swimming pool and several pensions. The historic Gap Temple and Mount Gyeryong National Park are both located within an hour’s drive of the temple.

Jeong Heon-mook, a 48-year-old businessman, says he goes on temple stay programs whenever he has time. “Temple stays give me a way to find myself when I feel I’ve lost my way,” Jeong says. “I once lost myself because I was too intent on making money and being popular. But then I decided to take control of my life and search for my own answers.”

Temples in southern Korea mainly offer tea ceremony and Zen meditation, because most of the country’s green tea is cultivated in the south. Geumsan Temple in Gimjae and Seonun Temple in Gochang, both in North Jeolla; and Daeheung Temple in Haenam, Baekyang Temple in Jangseong and Hwaeum Temple in Gure, all in South Jeolla, offer the chance to learn how to make traditional and fermented tea.


Retreating to the mountains

The venerable Woljeong Temple was built in the Silla Kingdom in A.D. 643 by the monk Jajang. It is a head temple of the Jogye Order of Korean Buddhism, located on the eastern slopes of Mount Odae in Pyeongchang County, Gangwon. Since 2002, Woljeong has hosted temple stays throughout the year, with an average of 200 to 300 Koreans and 50 foreigners coming each month. A special package is available for local families and foreigners over the summer holidays every year, with three nights and four days available for foreign visitors at 120,000-200,000 won ($95-$160).

Fees for temple stay programs vary depending on the location. The average price of a one-night, two-day stay is about 40,000-50,000 Korean won. Optional extras include classes in Buddhist teachings, the chance to climb the temple “wishing tower,” a walk through the nearby fir tree forest with prostrations every three steps and yoga practice. A monthlong stay, or the chance to be a “Buddhist priest for a month,” is also available for those who wish to experience what ascetic devotees go through, having their hair shaved and being dressed just like any other novice. When it was offered in July last year, only 60 people of the more than 400 who applied were able to experience this program. 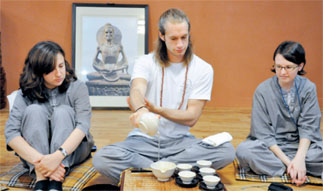 “The number of urbanites who wish to have mental and physical relaxation at a quiet and beautiful temple continues to grow, as they are too stressed from their busy daily lives,” says Kim Eun-mi, the temple stay coordinator at Woljeong. “Foreigners come to learn and experience the spirit of Eastern culture, Korean Buddhism and meditation.”

More than 150 Buddhist monks and administrative staff currently reside at Woljeong Temple, which also offers tours of Mount Odae National Park and the Yongpyeong ski resort linked to the temple stay program. Both of those attractions are just 20 minutes away by car. The Odae tour includes an introduction to the ecology of the area and several museum tours. Visitors can also enjoy a trip to the Herbnara arboretum, the birthplace of Korean novelist Lee Hyo-seok and the port and beach at Jumunjin on the east coast. Sangwon Temple, a small branch temple of Woljeong, is located midway up Mount Odae, and is worth visiting because of the famous monks who spent time here through the ages.

But you don’t have to go far afield to experience Buddhist serenity. Temples in Seoul also offer programs for urbanites, and more than 200 Koreans and 700 foreigners have already taken advantage of the ones offered by Myogak Temple. Located in a very quiet residential area along a 100-meter back alley that meanders off the main road in Sungin-dong, Jongno District, Myogak is surrounded by a small garden with a statue of the Buddha, enclosed by stone walls, granting tranquility even in the middle of the capital. The dull sound of the brass temple bell rings out across the greenery.

Myogak is well-known for its one-night, two-day temple stay programs for foreigners. Every weekend, starting at 2 p.m. on Saturday, visitors come to soothe their souls. The program begins with the making of Buddhist lanterns, followed by the striking of the bell with the monks in the evening and a yebul ceremonial service with chanting. Vegetarian meals are served at dinner, after which meditation lasts until 9:30 p.m., when visitors are required to go to bed.

You’ll be glad you did, because reveille is at 3 o’clock in the morning, when participants strike the bell and prostrate themselves 108 times in front of the statue of the Buddha in the Hall of Paradise in the pre-dawn mist. The 108 prostrations are supposed to rid one’s daily life of 108 kinds of anxieties and fantasies, and Myogak alumni say they are mentally calming, not strenuous. Then it’s time for yoga stretches and a mountain trek. A panoramic view of Seoul awaits at Naksan Park, to wash away hardships and stress.

A daylong program exclusively for foreigners is also available at any time regardless of the number of participants.

According to the Venerable Yeo Yeo, who is in charge of temple stay programs at Myogak, “People who had been suffering from serious hypochondria or those who have felt the impulse to commit suicide come here to be relieved from their mental stress.”

Jacques, a tourist from the United States who has participated in the program, says, “I really like this experience. It was very informative and eye-opening. I would recommend it to others very willingly.” 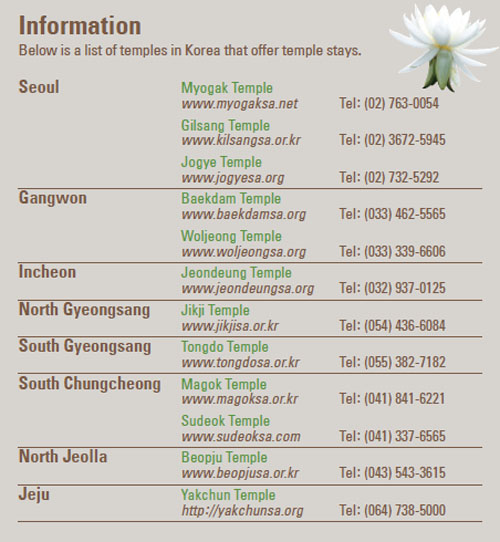 For a different Seoul experience, try Gilsang Temple, which was a house for gisaeng (female entertainers) called Daewongak from the 1960s to the 1980s. Gilsang offers the feeling that one is on a remote mountainside, but in fact it’s in Seongbuk 2-dong, near downtown Seoul. The temple is surrounded by a small forest with a cozy pond.

A forest path connects the main hall of the sanctum to the Hall of Paradise. The beautiful trees that surround Gilsang are the perfect setting for serene and undisturbed meditation. Gilsang’s temple stay programs are distinguished by longer periods of sitting meditation to allow more time for reflection.

Gilsang’s temple stay program is only available on the fourth weekend of each month.

Nine other Seoul temples, including Jogye Temple in Gyeonji-dong, Jongno District, and Hwagye Temple in Suyu 1-dong, Gangbuk District, offer temple stays for foreigners. The average cost of the programs is between 30,000 and 50,000 won for one night and two days. More than 30 temples will offer programs for children and youth beginning this year.

Details can be found on the Internet homepage of the Korea Buddhism Culture Business Corps, run by the Jogye Order of Korean Buddhism (www.templestay.com) or on the homepage for each temple.