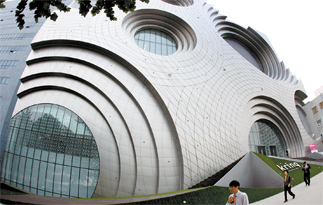 Gallery Yeh in Sinsa-dong, southern Seoul Courtesy of the gallery


There is nothing ordinary about the futuristic building that has taken up residence in southern Seoul. With its curved metal exterior and large circular windows, the building seems to have emerged from the ground like some kind of organic creature. Inside, white walls and a cylindrical bridge made of glass give the space the industrial feel of a factory.

The building is home to Kring, which means “circle” in Dutch, an art and performance complex run by the Kumho Group. It opened a year ago in Samseong-dong.

The building was designed by the architecture group Unsangdong, led by Jang Yoon-gyoo, 45, who is also a professor of architecture at Kookmin University, and Shin Chang-hoon, 39. The two are credited with unconventional designs that attempt to redefine architectural precepts.

Kumho Group chose their design from among a pool of others, but Jang said that it took some work to convince them that the structure could be built.

“They even asked us to make a pledge in writing,” Jang said with a smile. “Fortunately, the people at Kumho were very supportive and we were able to build it.”

Jang said that his design for the circular windows was inspired by an echo.

“The windows were meant to be passages that absorb and discharge urban energy,” he said.

When Jang and Shin approach a project, they start by asking themselves what the individual elements mean, and then they try to redefine them. Jang says the most important thing in architecture for him is authenticity. 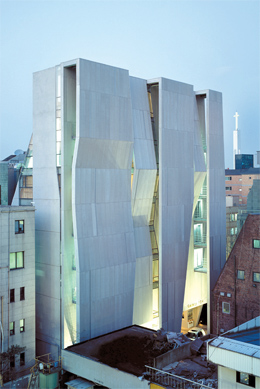 Gallery Yeh, established in 2006 on Garosu-gil, Sinsa-dong, southern Seoul, is an example of the team’s efforts.

In designing Gallery Yeh, which was a yearlong project undertaken in close collaboration with the gallery owner, they focused on the outer wall, asking what it was at its essence. The gallery’s facade is composed of a series of slate gray panels, between which the windows and a row of balconies can be seen. Through their design, they attempt to show that the wall is not just the shell of a building, but can become a space unto itself.

Jang and Shin have earned international recognition for their design work. They were awarded the prestigious Architectural Review Award for Yeh Gallery and the gallery was featured in over 15 foreign architectural journals.

Their efforts to redefine space can be seen in other buildings such as the department of architecture building at Seoul National University in southwestern Seoul and the Life and Power Press headquarters in Paju, Gyeonggi. The architecture department building has corridors that, at eight meters (26 feet), are four times the width of normal corridors. The Life and Power Press building has staircases that cut into its exterior, changing the overall shape of the building. 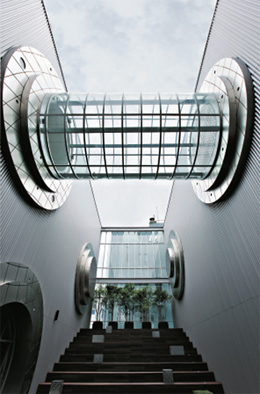 A glass and steel bridge inside Kring. Provided by Lemon Tree

“Architecture can’t stand alone,” Jang said. “It communicates with art and other disciplines to create new architectural languages. We want to find the possibilities this presents.”

Kring is holding a special screening of German films through Aug. 23. There will also be an outdoor screening of the German film “Beyond Silence” and the Japanese animated film “The Piano Forest” in the Sky Garden on the roof on Aug. 22 and 23. To reach Kring, go to Samseong Station, line No. 2, exit 3. For further information, call (02) 557-8898 and go to www.kring.co.kr.