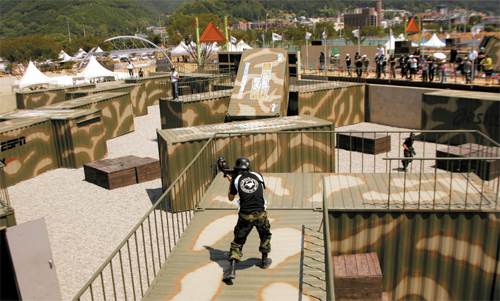 People participate in a survival game at Inje Military Park in Gangwon. By Kim Young-ju

“Watch out! There’s a sniper on your left!”

People crouch down behind buildings and hold their breath, their hands wrapped tightly around their guns.

This is not a scene from a movie, nor is it part of a video game. It’s not exactly a live battlefield either.

These people are having the time of their lives at a military theme park.

Inje Military Park, located in Inje County, Gangwon, opened in early May. It was designed to resemble the online game “Sudden Attack,” one of the most popular first-person shooter games on the market today. There are sometimes over 200,000 players connected to the online game at once.

Although the offline game is played differently from its online counterpart, the game is still a hit.

Carrying laser guns and wearing helmets with sensors attached, the fighters sweat it out for their survival over two sessions lasting 20 minutes each - and work out their stress.

According to a soldier from the Korean Special Military Command who participated in the competition, “This kind of training facility is hard to find, even in the military. Korea is probably the only country in the world with this kind of park for leisure and sport.”

Jang Jun-su, head of Culture Entertainment, the park’s operator, said that there are even a lot of ajumma, middle-aged women, on vacation at nearby Mount Seorak who stop by the park to try the game out or brush up on their marksmanship skills at the park’s shooting range.

“I think they love it because they’ve never touched a gun before in their lives,” Jang said.

Visitors who are hesitant to test the game can also join the fun. Seats placed above the battlefield give spectators a wide view of the action so they can track the movements of each team and speculate on their next moves.

But it doesn’t take long before even the most inhibited person on the bench is up out of their seat and on the field shooting it up with the rest of the crowd.