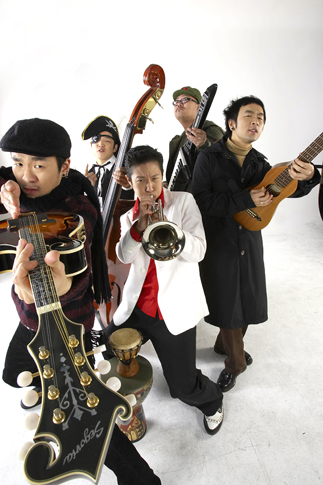 As soon as their music starts, you know it’s Crying Nut. The five-member rock band has released a new album after a three-year hiatus. Their sixth album is titled “Uncomfortable Party,” and my first reaction to it was that they’re still the “bad boys” of the Korean music scene. Bald yet metaphoric and cynical yet humorous lyrics cleverly combined with simple, funky rhythms are, after all, what propelled this underground indie band to stardom.

“People love spending freely as if they’re having a party, but it’s uncomfortable because you can see the end. The title implies the environment is at risk due to people’s greed and selfishness,” Lee Sang-hyeok said.

The environment isn’t the only current issue in Crying Nut’s latest album. The song “Good Kid” satirizes Korea’s education problems, particularly the craze over university entrance exams and the unusually high reliance on private education. “Wake Up,” deals with people today experiencing a sense of isolation amid a sea of information. But they are serious in a not-so-serious way - “Crying Nut-style.”

“We have no intention of enlightening people or anything,” said Kim. “We’re just talking about what we - average people in their 30s living in the year 2009 - think and feel.”

One big difference about the new album is that it was all made by Crying Nut - the lyrics, compositions, arrangements, production and recording. The band set up a small studio for the endeavor, and are left with the debt from buying all of the equipment, but the experience is something the members cherish greatly.

“We felt that if we recorded our own album, we could be more experimental, more us,” said Lee Sang-myeon.

Four of the five members went to serve in the military in 2003 and were discharged in 2005. It took them some time to get back on track making Crying Nut music.

“Clubs are our home ground. We kept performing at clubs, and the feel came back,” said Park.

On Sept. 5, the band will perform songs from its new album and more at Melon-AX Hall in Gwangjin District, eastern Seoul.