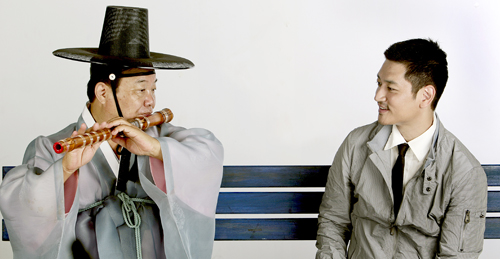 Lee Saeng-gang, 72, sits wearing a traditional hanbok and gat hat. Next to him is Bobby Kim, 36, in jeans and a tie. Lee’s a daegeum flute player. Kim’s an R&B pop star.

This pair may seem to have little in common.

But they’ve just been given the same title - that of goodwill ambassador for the upcoming Bucheon World Intangible Cultural Heritage Expo.

“Music - traditional or modern - is also intangible cultural heritage. That is why we chose them as our goodwill ambassadors,” said Irene Kang, a promoter for the event.

In fact, Lee has been officially designated an Important Intangible Property by the Korean government for his work on his traditional instrument.

Kim, meanwhile, is a Korean-American whose Korean name is Kim Do-gyun. He tries to combine the Korean sentiments in the music he sings with the rich stylings of African-American musical traditions. His hit songs include “A Whale’s Dream,” “Let Me Say Goodbye” and “Blue Bird.”

The two may be at opposite ends of the spectrum, but now they’ll have to work together to promote music as cultural heritage. The duo sat down with the JoongAng Daily earlier this month.

Q. How do you think traditional and modern music should coexist?

Kim: I lived in the United States since I was two. So whenever I attended Korean gatherings or watched Korean TV shows, the things that popped out to me were things traditionally Korean - traditional Korean music, dance, costumes, etc. They are beautiful. I was extremely moved by Lee’s daegeum performance. It sounded like it was talking to me. I think the most beautiful music Korea can make is music with a modern touch yet traditional inspiration.

Lee: Often people think that modern music like pop and hip-hop have nothing to do with tradition. But I think otherwise. What is ‘modern’ today may also become something ‘traditional’ along the way. That’s why, although I play a traditional instrument, sometimes I play along with pop music, and sometimes I try to play in a modern fashion. Gugak [traditional Korean music] has a five-note musical scale, and modern music has a seven-note musical scale, but that is not really a barrier.

Any plans for performing together?

Kim: I think I have been scared up until now. I wasn’t sure how my music would turn out if I added an instrument with which I am not that familiar, or how listeners would react to it. I would like to learn about traditional music and instruments first. I am particularly interested in traditional rhythms. I wonder how sounds will turn out when we add hip-hop or soul music to traditional rhythms.

Lee: We should try it. I don’t think the labels Western or Eastern have any significance in today’s music. The most important thing is to move the hearts of the audience. If these talented pop musicians collaborate with us, who have these wonderful instruments left from our ancestors, the alliance could bring out new, internationally competitive sounds.


The Bucheon World Intangible Cultural Heritage Expo will be held from Sept. 18 to Oct. 7 in Bucheon, Gyeonggi. A total of 152 artisans and 69 performing troupes will take part. For more visit www.bucheonexpo.org.