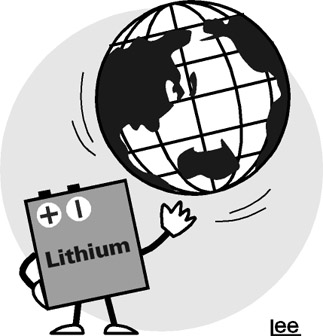 Lithium is a metal that can change the world. Although it doesn’t weigh much, it can bring about heavy changes.

It was John Cade, an Australian psychiatrist, who recognized its potential some 60 years ago.

Believing uric acid caused mental illness, he injected guinea pigs with a mixture of uric acid and lithium. The lithium was added to facilitate the dissolution of the acid. The experiment brought an unexpected result. Instead of going mad, the guinea pigs calmed down. Cade used the same treatment on 10 patients with bipolar disorder and found that the medical effect of the treatment was excellent.

Since then, mental diseases, which Sigmund Freud said were caused by psychological factors, have become thought of as biological diseases that can be cured with the use of drugs.

Nowadays, people carry lithium with them every day. Lithium cells are essential for mobile phones and notebooks.

Although lithium batteries are small and light, they are highly efficient.

They have controlled virtually the entire high-quality battery market since the 1970s. And there is hot competition among electric car manufacturers to develop the most efficient lithium battery.

Lithium has also changed the fate of a country. Bolivia, the second poorest country in South America after Guyana, has more than half of the world’s lithium deposits. With around 5.4 million tons of lithium, Bolivia is sitting on a vast source of potential wealth.

This lithium revolution is also changing the fate of Korean businesses. The battery GM decided to use for its electric car - the Chevrolet Volt, on which the American auto giant is staking its fate - is a product of LG Chemical. German company BMW has also decided to use batteries developed by a joint venture between Samsung SDI and Bosch.

The lithium battery has become a big hit for Korean companies. In addition, a research team at the Korea Institute of Geoscience and Mineral Resources led by Chung Kang-seop has developed modern technology to extract lithium from sea water, which will be economically viable if the price of lithium rises.

Lawmaker Lee Sang-deuk, President Lee Myung-bak’s brother, went to Bolivia last week. He said he would devote more time to diplomatic activities to secure more energy resources for Korea. He said Bolivian President Evo Morales had expressed the desire to “promote lithium development in collaboration with South Korea.” We can perhaps expect another big hit for lithium from his visit.