A cry for the wolf

A cry for the wolf 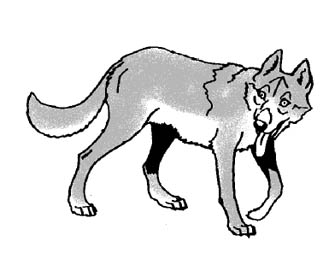 There are many stories about wolves in the book “Wild Animals I Have Known,” a classic collection of animal stories by Ernest Thompson Seton. One tells the tale of a wolf with black fur on its neck named “Badlands Billy” who weighed more than 63 kilograms (139 pounds) and had a 14-centimeter (5.5-inch) footprint. Billy evaded his enemies and often preyed on domestic animals.

One day, he happened to be chased by a pack of persistent hunting dogs. Billy tricked the 15 hounds into following him down a narrow path leading to a cliff and then shoved them over, one after the other.

Last February, researchers at Stanford University in the United States presented their findings in Science magazine that the black fur of some North American wolves, like Billy, is the result of interbreeding with domestic dogs in the distant past, perhaps 15,000 years ago. This tells us something about the genetic and biological relationship between dogs and wolves.

A skilled hunter featured in Seton’s book also said he has never seen a fatal attack on a human by a wolf. Even today, though rarely discussed, some wolves freely roam around cities in the U.S. and Russia. Wolves and humans coexist in peace.

However, people justify killing wolves, insisting that they cause substantial damage to domestic animals. Canadian conservationist and author Farley Mowat has criticized human cruelty toward animals and needless animal suffering in his book “Never Cry Wolf,” insisting that a considerable decrease in the number of reindeer in the North Pole is not caused by wolves, but mainly due to reckless hunting by furriers for thousands of species per year.

Wolves, which appeared 800,000 years ago, spread out across Europe, Asia and North America. However, only about 100,000 remain worldwide due to habitat destruction and excessive killing.

The last wild wolf in Korea was one caught in Yeongju, North Gyeongsang Province, in 1967. Now we can only see them in zoos.

Two female wolves died in Korea on Aug. 26, 2009. Ari, who was donated from a zoo in Harbin, China, fled her home at the zoo in Pocheon, Gyeonggi Province and was shot and killed.

Seoul Zoo’s Snuwolf was found dead, possibly due to a bacterial infection. Snuwolf was the world’s first cloned wolf, and was created by a Seoul National University team in 2005.

It is sad to see wolves destined to scamper around in wild fields and forests locked in cramped, narrow cages.

All we can do is help them die natural deaths, rather than sudden ones like Snuwolf and Ari.